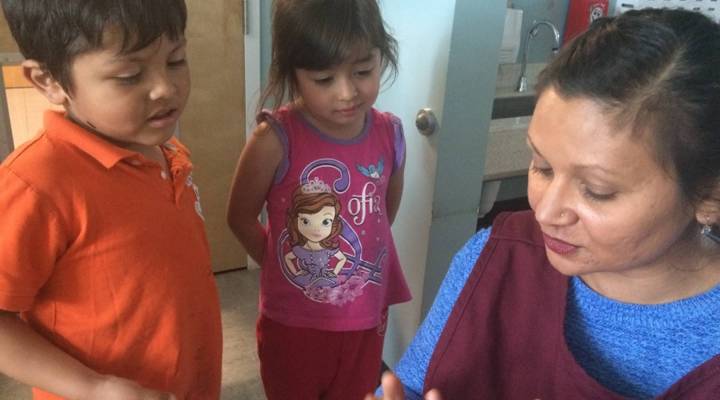 Silicon Valley’s tech companies have brought much wealth to the area. Yet in some pockets, like Santee, a small neighborhood in San Jose, it’s a different world.

Santee is just 10 miles from tech giants like eBay and Cisco Systems. Elizabeth Alvarez is a longtime San Jose resident and program director at the local school district’s Children’s Initiative. “This neighborhood has suffered around issues of crime and [is] a gang-impacted neighborhood,” she said.

Affordable housing is a big issue for residents, as is finding preschool. In Santee, there are only enough licensed child care seats for 20 percent of children under age five.

Alvarez knows many families are desperate for child care. “Many times I’ve heard people paying $2 a day, $10 a week for your neighbor to watch your child while you go to work,” she said.

This kind of informal child care, while common in many low-income communities, is said to be one of the reasons why children start school already behind.

Enter Educare. It’s a preschool, but its vision is much more ambitious.

Educare serves 168 children through full-day preschool classes, and it also is trying to reach other neighborhood children who didn’t get a place.

When  students walk into Educare, they are greeted with a jungle-themed exhibit from the Children’s Discovery Museum in the lobby. There are often other children playing there, many of whom don’t even attend Educare.

The complex has a Family Resource center open to the local community. A Santee resident and mother of three, Jacqueline Cortez, is getting some advice on job leads from a staff member as her children play.

Cortez said she brings her small children here every day, even though they are not enrolled in the preschool programs. “There are not many places to go in the neighborhood,” she said. “If this place is closed, there is really only the elementary school playground and that’s it.”

Beyond these free community spaces, there’s a series of sprawling yards and classrooms.

Roopali Born has been a preschool teacher for two decades and she leaped at the chance to teach at Educare when the center opened in September.

The school employs a philosophy known as Reggio Emilia that is based on learning guided by the child’s interests and explorations. The outdoor play spaces look different at Educare; they’re markedly bare. That’s deliberate, said Born.

“If you can look at our yard,” Born said, “there is no play structure. But you know what these kids are bringing? Their creative side.”

So what do the children do in an empty play yard? Born offers an example based on that day’s play. “They can take cardboard and create houses,” she said.

It’s a lot like the expensive, play-based, inquiry-based preschools that abound in the more affluent neighboring Silicon Valley communities. But this is all free for low-income families who qualify, and it’s paid for mostly with public pre-K dollars.

Lisa Kaufman, executive director of Educare at Silicon Valley, said the center could expand to serve more children. “There is space for a fourth wing where we would love to build that, and we know from the interest of the families that we would likely be very full very quickly.”

Ironically, the only thing stopping them in super wealthy Silicon Valley is, well, money.