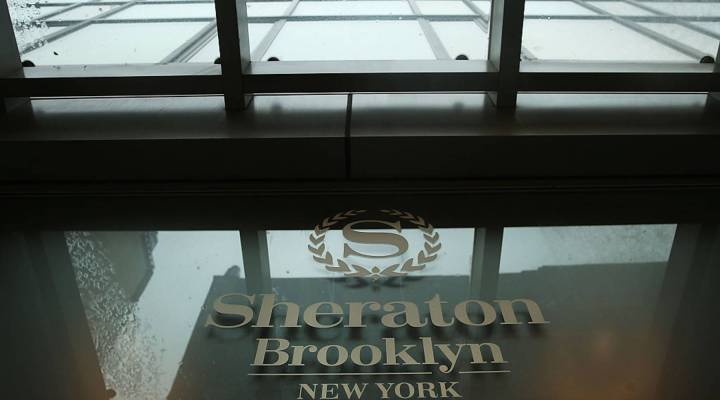 COPY
A Sheraton Hotel sign stands in downtown Brooklyn on March 14, 2016 in New York City. A fight for the Starwood Hotel chain, which Sheraton is a member of, is underway following a $14 billion buyout offer Monday from a consortium led by China's Anbang Insurance Group.   Spencer Platt/Getty Images

A Sheraton Hotel sign stands in downtown Brooklyn on March 14, 2016 in New York City. A fight for the Starwood Hotel chain, which Sheraton is a member of, is underway following a $14 billion buyout offer Monday from a consortium led by China's Anbang Insurance Group.   Spencer Platt/Getty Images
Listen Now

Another Chinese company with deep pockets is shopping in America. Anbang Insurance Group has an offer on the table for Starwood Hotels, threatening the $12.2 billion dollar deal Marriot struck to buy Starwood. This comes as more and more Chinese investors are buying up American real estate and companies, which makes some people uncomfortable.

Lots of foreigners buy into America. Canadians have invested more over time than the Chinese, but nobody worries much, because Canada’s seen as a friendly ally next door. But China gets outsized attention because it’s still unfamiliar.

“Initially, a lot of the investors are unknown and so people have lots of questions about them and maybe concerns,” said Patrick Chovanec of Silvercrest Asset Management.

But that’s starting to change as China’s credibility and buying power grows. The fact that China and the rest of the world want to invest here means America is seen as safe and growing, which is a compliment. In general, whether someone is selling a building, a company or just a couch on Craigslist, the more bidders, the better price.

But some people worry that as more foreign investors—from China and around the globe—pour money into America, things may get out of hand. Wharton School real estate professor Sam Chandan thinks this may already be happening in commercial real estate in the largest American cities.

“We’re at a point where Chinese investors and other contributors have pushed the envelope a little bit,” he explained. “That, I think is acting to lift prices in a way that is raising concerns.”

In a hot market for American assets that includes heavy hitting investors here and abroad, China’s just one player among many. But it’s new, it’s intriguing and it keeps getting hungrier. So every big deal Chinese investors strike in America will raise eyebrows.