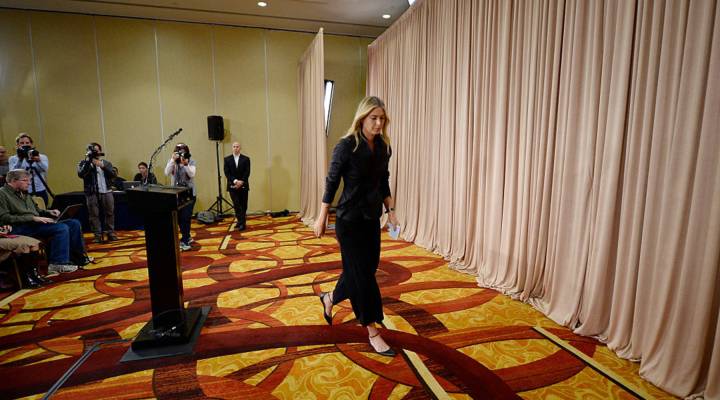 Tennis player Maria Sharapova addresses the media regarding a failed drug test at the Australian Open at The LA Hotel Downtown on March 7, 2016 in Los Angeles, California.  Kevork Djansezian/Getty Images

Tennis player Maria Sharapova addresses the media regarding a failed drug test at the Australian Open at The LA Hotel Downtown on March 7, 2016 in Los Angeles, California.  Kevork Djansezian/Getty Images

Brands started distancing themselves from tennis pro Maria Sharapova after her announcement that she failed a drug test, the BBC Business reported Tuesday.

Nike, Swiss watchmaker Tag Heuer and German car maker Porsche all confirmed they were suspending their deals with her. Mineral water company Evian told Reuters it will “follow closely the development of the investigation.” When reached by Marketplace, beauty brand Avon declined to comment.

Sharapova announced Monday she tested positive for meldonium, which she said she had been taking since 2006 for health issues. She said didn’t realized the drug was on a banned substance list because she didn’t click on a link in an email, and was disqualified from the Austrailan Open.

As one of the highest paid female athletes, raking in earnings of over $30 million last year from winnings and endorsements, Sharapova was known for helping brands market to an affluent crowd. There’s been much discussion around how her appearance — beautiful, blonde and white — makes her a favorite among sponsors and speaks to the pay gap in athletics. In 2014, Sharapova made $10 million more than fellow tennis pro Serena Williams in endorsement deals, despite Williams’ dominance on the court. But Sharapova’s appearance doesn’t seem to be stopping sponsors from quickly leaving the table.

Tag Heuer said the brand and Sharapova were in talks to renew her contract, which ended last year.

“In view of the current situation, the Swiss watch brand has suspended negotiations,” the company said in a statement.

Sharapova has long had a relationship with Nike, which sells a line of Sharapova-branded athletic wear.

“We are saddened and surprised by the news about Maria Sharapova,” Nike said in a statement. “We have decided to suspend our relationship with Maria while the investigation continues. We will continue to monitor the situation.”

The company did not comment on whether or not it would continue selling Sharapova’s line after current inventory is exhausted.

Correction: A previous version of this story incorrectly spelled Porsche. The text has been corrected. 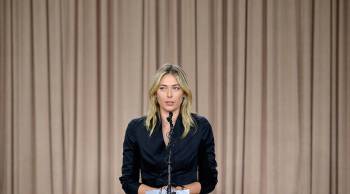