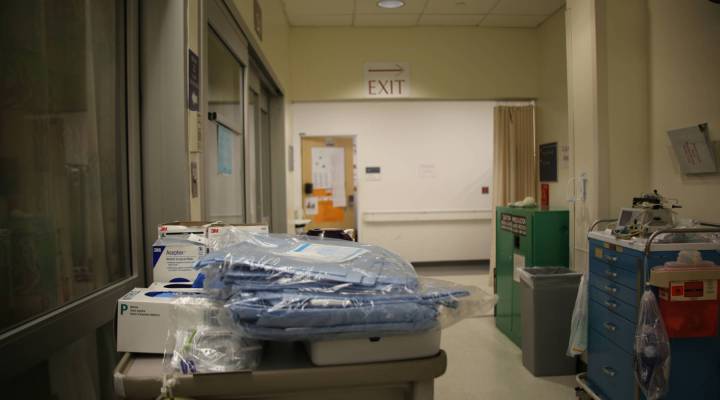 Note: This is the first of a three-part series about human trafficking and health care. You can find to the second part, about what happens to victims when they get a chance to run, here. Find the third part, about how the health care system can start making a difference, here.

Dr. A rolled his eyes.

It was last October, and he had just come across a triage note that said, “I have a tracker in me.”

Dr. A  — we’re not using his name or identifying his hospital, which is in a major American city, to protect patient safety — is 28 years old, a resident and about as green as they come.

And he’s got a patient who claims she’s got a GPS tracking device implanted in her side.

“When you work on the east side of our hospital, psychiatric patients are a dime a dozen,” he said.

But this patient is different. She’s put together. She’s lucid. She’s got an incision.

A group crowded around the computer to see her x-ray.

“Embedded in the right side of her flank is a small metallic object only a little bit larger than a grain of rice,” he said. “But it’s there. It’s unequivocally there. She has a tracker in her. And no one was speaking for like five seconds — and in a busy ER that’s saying something.”

A tracking chip was removed in October 2015 from a patient who was a victim of human trafficking.

It turns out this 20-something woman was being pimped out by her boyfriend, forced to sell herself for sex and hand him the money.

“It was a small glass capsule with a little almost like a circuit board inside of it,” he said. “It’s an RFID chip. It’s used to tag cats and dogs. And someone had tagged her like an animal, like she was somebody’s pet that they owned.”

This is human trafficking. It’s a marginal issue here in the U.S. for most of us. Part of that is because the average person isn’t sure what human trafficking – or modern day slavery – actually means.

“Very plainly, human trafficking is when one person takes advantage of another person for some profit,” said Katherine Chon, director of the newly created Office on Trafficking in Persons at the U.S. Department of Health and Human Services.

Trafficking can mean being locked in a room, having an RFID chip injected under your skin, or something like your employer holding your passport. It’s found in industries from prostitution to manufacturing to domestic service.

Breaking this cycle of violence traditionally has been left to law enforcement. But in the last three years, people in healthcare are waking up to the fact that they can play a critical role.

“I can guarantee you that I’ve placed my hands and I’ve examined and I’ve spoken to more trafficking victims than I know I have,” said Wendy Macias, an ER doctor at Massachusetts General Hospital in Boston.

Macias is one of the nation’s leading advocates to get doctors, nurses and hospital executives involved.

One report finds as many as 88 percent of sex trafficking victims end up in ERs and clinics at some point while being held.

Much different than law enforcement, healthcare providers get these moments — a sort of a privileged access into the lives of people who often are out of reach

“You know traffickers are really smart, they will move their patients around from one city to the next all across the country,” she said. “I want us to help them when we have them in our midst because it may be the last time that they’re there.”

But here’s the challenge: you’ve got to convince doctors and nurses that they are the ones uniquely placed to break the cycle of violence.

Dr. Dale Carrison at the University Medical Center in Las Vegas hopes the case with the tracking device is so disturbing that it pushes people in healthcare to action.

“There’s so many sci-fi movies where they stick a device in somebody. Well guess what? It’s real. It happened,” he said. “That was a big wake up call for me personally that ‘Uh-oh we’re going to another level now.’ And I need to get the word out to all my colleagues, don’t blow this off.”

There are some signs of life.

Money is beginning to flow to train clinicians to identify patients. More than half a dozen professional societies – including the American Medical Association – have passed resolutions highlighting the problem. The grass-roots group Heal Trafficking — made up of some 600 providers — has formed.

The first step is simple awareness.

Knowledge certainly has helped change how Dr. A approaches his patients.

“It’s always important to simply consider the possibility that something not obvious might be going on. And recognizing that is the first step to diagnose it,” he said.

Since that October afternoon, Dr. A says he’s pulled about five patients aside, checking for signs of trafficking.

He’s come up empty each time. He explains, that’s what he does, rule out the bad stuff.