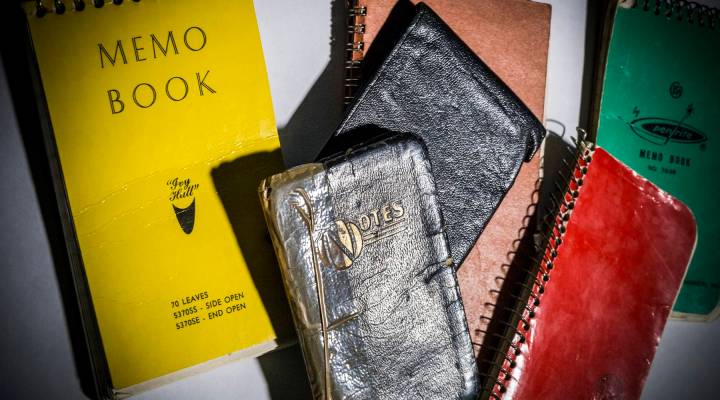 Bob Dylan's notebooks Courtesy of the University of Tulsa

Bob Dylan's notebooks Courtesy of the University of Tulsa

For all of those Bob Dylan fans who have debated, dissected and pondered over his lyrics and what they might mean, today is a day for celebration.

The George Kaiser Family Foundation and the University of Tulsa announced today that they have acquired the rumored (but until now unconfirmed) Dylan Archives – a vast treasure trove that shows how the iconic American musician worked, including voluminous rewrites of his songs.

“This is beyond a bonanza,” said Princeton historian Sean Wilentz, author of the biography “Bob Dylan in America.”

The manuscripts unlock “a great deal about the meanings of the songs,” he said.

The archives are in cold storage in New York and other locations. The Kaiser Family Foundation projects that it will take years to transfer all the material to its new home in Tulsa.

The price tag for the purchase is reportedly between $15 million and $20 million. The foundation would not confirm the amount.

“It’s a massive archive. We have at least 6,000 items. The materials date back to the late 50s,” said Ken Levit, the executive director of The Kaiser Family Foundation.

You can hear edited excerpts from our interview below.

The archives contain writings, photographs, original tapes, films, and posters. They also include significant memorabilia, such as the leather jacket Dylan wore when he switched from acoustic to electric guitar, and got booed at the infamous Newport Folk Festival in 1965.

Of all the materials in the archives, the manuscripts are most significant, Wilentz said, because they help expose “the process in which [Dylan] went about creating his art.”

Dylan came into prominence during the counterculture movement of the 1960s and helped define that generation.

“Bob Dylan came along at a time… when there was this revolution in the air,” Wilentz said, “He had an extraordinary ability… to capture the feelings of what was going on around him.”

You can listen below to excerpts from our interview with Sean Wilentz about Bob Dylan’s historical significance.

Several major musical figures are rumored to have archives, as well. The question now is whether the big price tag for Dylan’s collections will inspire other artists to part with their cherished treasures.

One artist, in particular, came to mind.

“Prince’s archives are also highly sought after. He has a supposed vault of material that spans his entire career. And he has never even allowed a glimpse into it, or given us even hints of what it might contain,” Swensson said.

A close-up of an item in the archive.

Courtesy of the University of Tulsa

Levit expects that the news of Dylan’s sale will indeed spur other artists to reach out to his foundation, looking to sell their archives to an institution that can handle them properly.

“Nothing yet, but we will definitely answer the phone,” Levit said, “We do expect others to be interested, and we think we could be on the cusp of something that will be very exciting for our community and maybe even the country one day.”