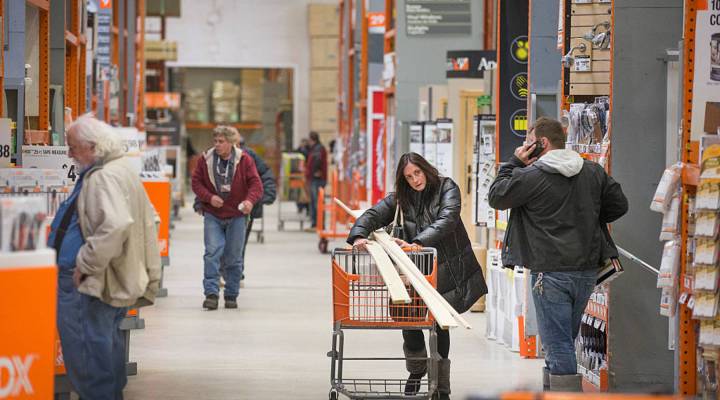 Continued improvements in the housing market are boosting Home Depot and Lowe’s, which this week reported sales growth and better-than-expected earnings for the fourth quarter.

“Their sales trends are much better than the rest of the retail industry,” said Wedbush Securities analyst Seth Basham.

“Until this year, we had a lot of customers with negative equity. But now only around five percent are underwater,” he said.

In some cases, consumers are preferring to spend on their homes than on apparel and electronics.

That’s the case for Ryan Taughrin. He and his wife have been finishing the basement of their house outside Buffalo, New York and have spent about $3,500 on items like drywall and new tools at their local Home Depot. Taughrin said they wanted to give their toddler a play area.

“The place was great but needed room for running around,” he said.

During the renovation, they scaled back spending at other retailers. That meant no new TV for the newly finished basement. Instead, they settled for putting an old one down there.

“We made those decisions and trade-offs to put all our funds towards that versus anything else,” he said.

As housing metrics continue to improve in 2016, home improvement companies are expected to benefit.