The hardest jobs to fill

The hardest jobs to fill

The number of jobs openings climbed to the second-highest it’s ever been in December — That’s according to data from the Bureau of Labor Statistics, out this week.

Tech jobs can be among those that stay open the longest…and the job search site Indeed.com took a look at which ones stay open more than 60 days. They found that IT specialists are at the top of the list, followed by software engineers.

The average salary for an IT specialist is around $46,000, compared to an engineer, which is nearly six figures.

D’Arcy said the key to filling those roles is to follow the talent. “In Austin right now, 17 of the 25 companies that are hiring the most engineers are not Austin companies. They’re companies coming from all over the world, because this is one of the cities that tech talent really wants to go to.”

Other places tech talent wants to go? San Jose, San Francisco, and Seattle. Be on the look out for job postings…and caffeine-fueled coders. 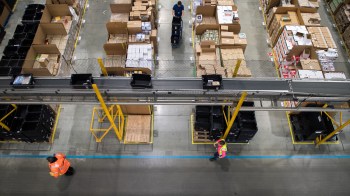 Warehouse jobs increased by 50,000 this month. Are those jobs here to stay?