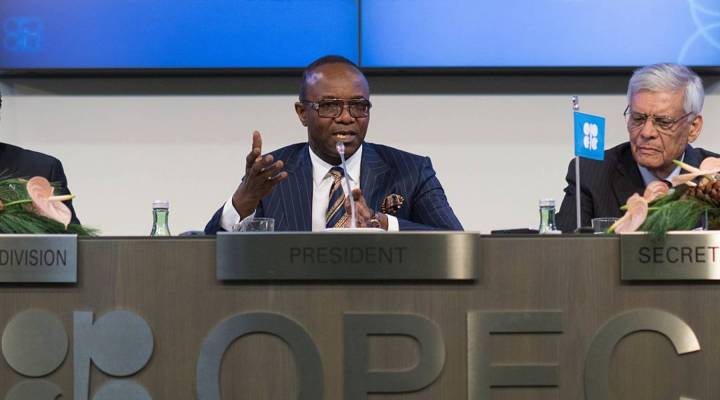 COPY
President of the OPEC Conference Emmanuel Ibe Kachikwu at a news conference after a meeting of the Organization of the Petroleum Exporting Countries (OPEC), at OPEC headquarters in Vienna, Austria on December 4, 2015. JOE KLAMAR/AFP/Getty Images

President of the OPEC Conference Emmanuel Ibe Kachikwu at a news conference after a meeting of the Organization of the Petroleum Exporting Countries (OPEC), at OPEC headquarters in Vienna, Austria on December 4, 2015. JOE KLAMAR/AFP/Getty Images
Listen Now

Crude oil traded in the U.S. fell nearly six percent today, to less than $28 a barrel.  One reason: The International Energy Agency reported the world’s oversupply may be about to get even worse. The IEA reports production from Iran, Iraq and Saudi Arabia, all members of the Organization of the Petroleum Exporting Countries (OPEC),  increased, as supply growth outpaced demand growth. One question now is whether OPEC is still doing its historic job.

Until recently, OPEC has been a sort of central bank for oil – managing supply and stabilizing  prices. But industry consultant Bob McNally, president of the Rapidan Group, said the cartel has been AWOL since 2008.

“OPEC failed to prevent oil prices from spiking and contributing to a great recession,” McNally said. “We are now paying attention because since October of 2014,  OPEC has failed to put a floor under oil prices.”

There are a couple of assumed reasons why: OPEC members don’t get along so well and if key Arab producers pull back, two rivals are ready to pounce and steal customers quickly.

“If they cut production, U.S. production could increase,” said Jamie Webster, oil markets director at IHS. “And there’s also a concern that Iranian production is starting to come back in a post-sanctions world. No entity, Saudi Arabia or others, wants to give up market share to Iran.”

So, all OPEC members are pumping instead of managing global supply. Production is up, even as prices tank. It’s a Darwinian free-for-all.

This is not the normal state. In the nearly 150-year era of oil, typically there has been an entity managing supply, said Alex Schindelar of Energy Intelligence in London. Before OPEC, the Texas Railroad Commission and the “Seven Sisters” international oil companies managed the market. And before that, John Rockefeller’s Standard Oil had the job.

“There’s only been two times when oil was not being regulated by someone,” Schindelar said. “To not have an active manager in the market is a major change for the oil industry. And I think that’s why we’re seeing such confusion about how to proceed.”

There is reported talk within OPEC of a coordinated emergency cut, perhaps in combination with non-member Russia. The group may eventually return to its old role as the world’s “swing producer.”

But doubters say the structure of the market has created a new, post-OPEC world. And that may not be a good thing.

In other words, buckle up, it could be a bumpy ride.