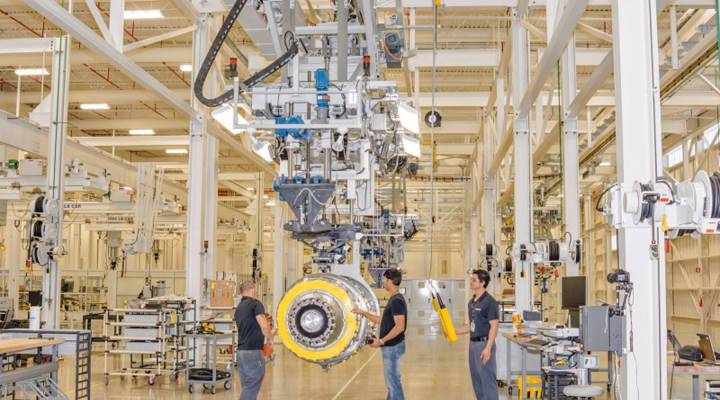 COPY
Jet engines, suspended from a track on the ceiling, are moved down the assembly line.  Courtesy, Pratt & Whitney

Jet engines, suspended from a track on the ceiling, are moved down the assembly line.  Courtesy, Pratt & Whitney
Listen Now

Even in these days of industrial robots and assembly line automation, a few things are still built largely by hand. And those include, believe it or not, jet engines. Now the ramp up in demand for commercial aircraft has challenged the jet engine business to take a fresh look at a very old assembly technique.

Pratt & Whitney has one of its biggest U.S. engine centers in Middletown, Connecticut. And on one side of the main shopfloor, several jet engines in various states of readiness hang suspended from a track on the ceiling. This installation represents one part of a multi billion-dollar investment Pratt has made in a new engine, and a new way of making it: moving assembly.

“It moves down one side of the oval, like a racetrack. And it has progressive steps of assembly,” said Tom Mayes, general manager of the Middletown center. Engines under construction can glide with the push of a button from one build station to the next. “The mechanic when he’s doing an assembly operation, the computer knows where he prefers the rotation and the up and down and can automatically go there at his desire.”

On the other side of this same shop floor, engines are still being built the old way. “In a static build structure, the engine doesn’t move or rotate,” said Mayes, “so you’re climbing on ladders to reach the top assemblies, you’re crawling on your back to reach bottom assemblies.”

The engine is suspended in a horizontal position, so a mechanic can adjust the height for easy access.

Henry Ford may have invented large-scale moving assembly for automobiles in the early 1900s, but in the aerospace industry, this line is completely revolutionary. And for mechanic Neal Werboff, it’s a welcome change. “It is a lot easier. I’m a big guy and reaching up and bending over takes its toll on me,” he said.

Werboff has worked at Pratt for 37 years, and he said at first he was cautious. “It is futuristic. Like something out of Star Wars… for a jet engine assembly. We’ve done things so long the old way, that you become entrenched in the way of doing things, and something new like this is like, will it work, is it a good idea, should we change? And the first engine we did on this, I never want to go back to the old way.”

That reaction, according to engineer Ted Sluis, is exactly the point. “The easier you make the mechanics’ job, the better quality product that you get, the more efficient the product is produced, and ultimately the more you can build in a year.”

Sluis is one of the designers of this system. The reason jet engines have never been built like cars, is because they’ve always been a low volume business. “If you didn’t have the volume on this product line you would never do this,” he said. “The investment has to buy itself in. And that efficiency gain has to have a payback over a certain period of time, and without the volume it doesn’t do that.”

The engine that’s being built this way is the key to the volume. It’s a new technology that Pratt calls PurePower, designed to burn 15 percent less fuel than a conventional engine. The company now has a backlog of orders for about 7,000 of these engines. With the old method of assembly, it could have built about 300 a year in this engine center. Now with moving assembly lines installed here and in its facility at West Palm Beach in Florida, it could potentially build a thousand a year.

But managing such a massive investment is never going to be simple. “The real challenge in any new technology is learning how to build it, and learning how to build it at a profit,” said Richard Aboulafia, an aerospace analyst with the Teal Group. He said Pratt has taken on a formidable set of problems. “Driving down costs, driving down defects when they happen in the manufacturing process, and of course just the investment needed to ramp up to levels that Pratt hasn’t seen in the commercial business in decades.”

Some of those speed bumps were evident in December, when Airbus, the biggest customer for the new engine had to delay delivery of the first of its A320neo jets, in part because of technical issues with the engine. But that was rectified just recently as Lufthansa became the first airline to put the new engine into service.