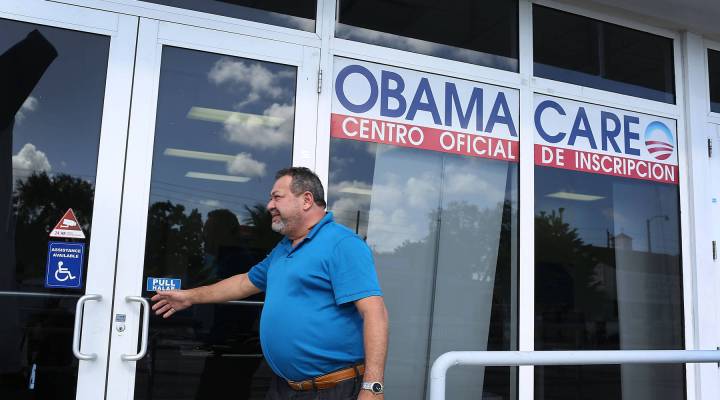 COPY
A person walks into the UniVista Insurance company office where people are signing up for health care plans under the Affordable Care Act. Joe Raedle/Getty Images

A person walks into the UniVista Insurance company office where people are signing up for health care plans under the Affordable Care Act. Joe Raedle/Getty Images
Listen Now

The deadline for getting health insurance through a government-run marketplace is January 31, and skipping out on insurance this year could cost you double what it cost last year as fines climb to $695 per adult, or 2.5 percent of household income — whichever is greater.

But even with that bigger stick, Brian Blase with the Mercatus Center at George Mason said he expects plenty of people to sit this year out.

“It largely comes down to price and that the insurance is just expensive for people,” he said.

Roughly 30 million Americans remain uninsured. And of those, the Urban Institute estimates half qualify for Medicaid, are undocumented, or live in a state that sat out the Medicaid expansion under the ACA.

Urban’s Linda Blumberg said, middle-income families are forced to decide whether to spend around 10 percent of their income on insurance, or roll the dice with their health.

“Maybe that’s a signal to us that we haven’t done quite enough to make the coverage feel affordable to them,” she said.

While increasing subsidies is highly unlikely, Blumberg says the best way to drive enrollment may be to invest more in outreach.