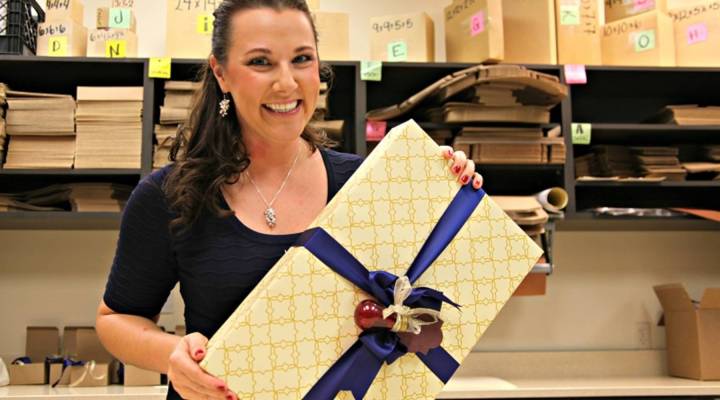 COPY
What kinds of gifts did you ask for or register for? Kristofor Husted
Brought to You By

What kinds of gifts did you ask for or register for? Kristofor Husted
Listen Now

At the Country Club Plaza shopping center in Kansas City, Missouri, customers bring their purchases to Melissa Anderson. She’s been wrapping gifts here for five years. Today she’s wrapping a box from a clothing store. The off-white paper has ornately interlocking gold lines. She said opening a gift is an experience.

“If you’re receiving a gift and the first thing you see is this beautifully wrapped gift, it’s like, ‘Wow,’” she said. “You’re almost more appreciative for the time and effort it took to put into wrapping the gift than the gift itself.”

Anderson said the holidays are the busiest time of year for the wrapping station at the Plaza. Last year she said, her team wrapped 850 gifts. She’s hoping to break that record this year.

In the U.S., gift wrap accounts for $3.2 billion a year in retail sales, according to research by the Hallmark Company. And the holidays account for a large portion of those sales, according to Patti Stracher, the vice president and director of the National Stationery Show.

“The contemporary market has really expanded beyond the traditional categories of birthday for juveniles or largely seasonal, because the fourth quarter and holiday wrap is really important,” she said. “Gift wrapping is not just the wrap. It’s the ribbon. It’s the tag. It’s the seal or sticker. There are a lot of components to building the package to be fabulous.”

That ritual of wrapping holiday gifts started about 100 years ago.

“Gift wrap used to be just brown paper, or there were some colors: red and green tissue paper,” according to Ron Worley, the outreach supervisor at the Hallmark Visitors Center.

He said people mostly used to wrap gifts to protect them — purely functional. Brothers Joyce C. and Rollie Hall, the founders of Hallmark, sold that kind of paper at their shop in Kansas City, Missouri. But during the1917 holiday season, they ran out. So the famous card company turned to what paper it had left.

Ron Worley from Hallmark pulls out some of the paper the company founders sold as gift wrap.

“The envelopes were lined with this French paper,” Worley said as he reached into a protective plastic sleeve to pull out some original strips of paper Hallmark stuffed into envelopes. They’re covered in patterns of flowers and leaves, and colors of purple, blue and orange.

“They went back to the warehouse and brought this out and sold it for 10 cents a sheet,” Worley said.  “It sold out. The next year they really stocked up and sold it for three sheets for a quarter, and they sold out again. And that year they started making their own gift wrap.”

From that point on, the wrapping paper industry grew. In 1956, Hallmark sent a woman around the country to teach Americans how to wrap the perfect present. The company even made a tutorial video.

The bow trend picked up in the 1950s. Gift bags debuted in the 1980s. Today, there is gift wrap on the market that’s reusable and biodegradable.

“One of the trends design wise in the market place is one of more simplified lack of color,” she said. “So you see craft, white, gold, black, mixed metallic.”

Ultimately, she said the industry evolves alongside consumers’ tastes.

“We’re watching HGTV,” she said. “We’re looking at Pinterest a lot, yes, and Instagram, and looking at what’s just out in fashion-forward stores.”

This isn’t your grandmother’s wrapping paper anymore, but there is some of that available, too, for traditionalists. David said it’s still one of the hottest items.