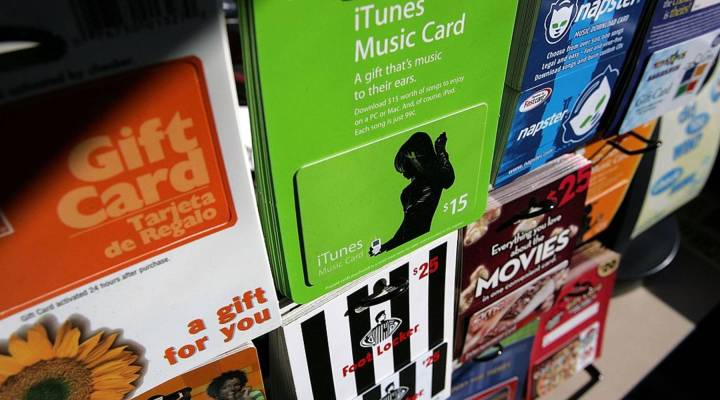 COPY
That wall of different gift cards hanging on hooks at the end of a drugstore or grocery story aisle actually has a name: the gift card mall. Justin Sullivan/Getty Images

That wall of different gift cards hanging on hooks at the end of a drugstore or grocery story aisle actually has a name: the gift card mall. Justin Sullivan/Getty Images
Listen Now

Impersonal as they may be, for the 12th year in a row, gift cards are the most popular item on holiday wish lists. According to the National Retail Federation, 60 percent of us asked for gift cards this holiday season.

Consumers like gift cards because they’re easy to give. Stores like them because people tend to overspend when they have that free money feeling. For those on the receiving end, there’s another major advantage, according to Joel Waldfogel, a professor at the University of Minnesota and author of “Scroogenomics: Why You Shouldn’t Buy Presents for the Holidays.”

“They allow the recipient to choose what he or she wants,” Waldfogel said. “They seem to avoid the ickiness of cash but they have all the efficiency of cash.”

And aside from avoiding the ick factor, gift cards can be more freeing than cash.

“When people give us cash sometimes we feel guilty about spending the money on ourselves. We might use it to buy groceries or save for our kids’ education,” explained Bruce Wydick, a professor at the University of San Francisco. “Gift cards are different because somebody else has made the decision that we’re going to spend it on our own pleasure.”

Still, maybe you didn’t want a Starbucks card because you hate coffee. That’s where the resale market comes into play. On websites like Cardpool and Raise, unhappy recipients can sell their cards, often at a discount. For stores, what matters is that the card is actually used.

“They don’t get to record any gift card revenue as revenue until a consumer actually purchases a product with that,” said Sucharita Kodali, a retail analyst at Forrester.

And if the card is never used? In some states, it eventually gets turned over to the government as unclaimed property.