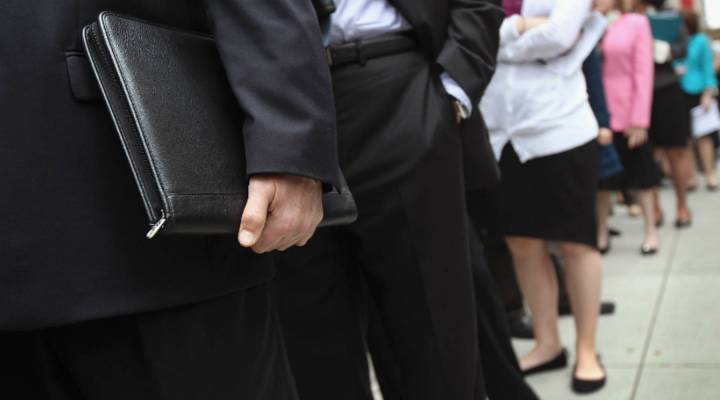 COPY
People stand in a line that stretched around the block to enter a job fair.  John Moore/Getty Images

People stand in a line that stretched around the block to enter a job fair.  John Moore/Getty Images
Listen Now

During several previous historical periods of strong economic growth, unemployment has fallen well below 5.0 percent. Here are some unemployment benchmarks hit since the Bureau of Labor Statistics began measuring employment in 1948:

Unemployment also hovered below 5 percent In the years leading up to the Great Recession (which lasted from December 2007 to June 2009, according to the National Bureau of Economic Research). Unemployment ranged between 4.4 percent to 5 percent from June 2005 through December 2007. Unemployment soon began its steep rise as layoffs mounted and hiring froze up in the Great Recession, reaching a high of 10 percent in October 2009. The unemployment rate has fallen by half from that post-recession peak to October 2015.

Elise Gould at the Economic Policy Institute said the late-1990s economic boom provides the strongest example in recent decades of an economy in which very-low unemployment translated into very-robust pay gains for a wide range of workers up and down the income ladder. “We saw substantial wage growth, across the wage distribution—a full-employment economy, a tighter economy,” Gould said.

Paul Ashworth at Capital Economics in Toronto explained that a concept called the Phillips Curve explains this pattern in the business cycle. “As the unemployment rate goes down, and as there are fewer people out-of-work and more people already in work, employers find it harder to get hold of new workers,” said Ashworth. “And therefore they have to pay higher wages.”

Amy Glaser, senior VP at Adecco Staffing, who is based in Lexington, Kentucky, and handles hiring across the central U.S., said her clients are feeling the impact of falling unemployment.

“We’re definitely seeing the tables turn from an employer’s market to a job-seeker’s market,” said Glaser. This is especially true in metro areas with a strong job market and below-average unemployment, she said. And it’s happening across employment sectors—from technical, medical and managerial professionals, to clerical and logistics workers and temporary holiday retail workers.

“They’re having to make decisions and choices very quickly or they’re losing the candidates,” she said of employers. “We’re seeing clients increase pay rates from $1 to $3 or $4/hour, we’re seeing sign-on bonuses and retention bonuses.”

As wages rise, employers are under increasing pressure to pass some of their increased compensation costs on to consumers and business customers (increased productivity of workers and equipment can offset some of the rise in wages). If wages start rising strongly in 2016, “we would start to see price inflation show up in a lot of areas,” said Mike Baele, managing director of US Bank’s private client reserve:. “And that’s something that the market and investors are not prepared for.”

Of course, it might turn out that October’s acceleration in wage inflation was just a one-month blip, and that wage gains will subside in coming months. Paul Ashworth pointed out that another closely-watched measure of inflation, the Employment Cost Index, has shown less strong wage-growth in recent months.

Elise Gould predicted that wage growth, now running at 2.5 percent annually, will remain relatively anemic—well below the Federal Reserve’s target of 3.5–4 percent annual growth, for some time.  She attributed continued mediocre wage gains to the weakening of employees’ bargaining power relative to employers, and the large reservoir of prime-age workers who remain out of the workforce. Those potential workers could re-enter the labor market if job prospects and starting salaries improve enough, providing competition for current job-seekers and helping employers to meet their recruitment needs without increasing wages precipitously.