Looking for progress for treating Alzheimer’s

Looking for progress for treating Alzheimer’s

More than five million Americans suffer from Alzheimer’s, a disease that can’t be prevented or slowed, much less cured. The FDA hasn’t approved a new drug to treat it in more than 10 years. As a result, some big pharmaceutical companies are getting together in Washington this week to discuss experimental drugs that hope to fill that market gap.

Eli Lilly is releasing results from a clinical trial of solanezumab. Dr. Bill Thies is senior scientist in residence at the Alzheimer’s Association. “One of the issues in Alzheimer’s trials is that it’s a relatively slowly progressing disease,” he says. “So it’s hard to see changes in the rate of progression.”

But Thies says today’s data should give doctors a better sense of whether this drug is working. The key is a third trial that’s already underway. The results of that trial should be made available in 12 to 18 months. “The FDA has agreed to accept the first two trials as a pivotal proof of the effectiveness of the drug,” Thies says.

“So, if this third trial is successful, that gives us the opportunity to see a drug that actually will be eligible for licensing. That data is in the future but it’s relatively soon in the future.”

Ashtyn Evans, a healthcare analyst with Edward Jones, says the market potential for drugs like solanezumab is huge. “This is an unmet need,” she says. “There’s currently nothing on the market right now that is disease modifying or actually slows the cognitive decline. So, the potential for a drug that actually helps slow the decline could be quite large.”

Eli Lilly sees a market opportunity and has already invested close to a billion dollars in its Alzheimer’s program. After all, the disease is the sixth leading cause of death among Americans and is the only one in the top ten that currently can’t be prevented, cured or slowed. 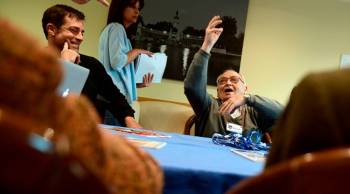