Saying Alexandre Desplat is a busy man is one heck of an understatement.

The French composer has 158 film scoring credits to his name, and he has become Hollywood’s go-go guy for soundtracks. Last year alone he composed scores for “Godzilla,” “The Monuments Men,” “Unbroken,” “The Imitation Game” and “The Grand Budapest Hotel.” Those last two earned Desplat his seventh and eighth Oscar nominations.

Desplat’s success is not due to talent alone. He also has a reputation as someone who can deliver on tight deadlines, often scoring a film in less than three weeks. He says the ticking clock can make for some sleepless nights and nervous mornings.

Our work is really related to a deadline, always, because there is a release date and you can’t deliver the music too late. So every morning you think, ‘Hmm, will I find what I’m seeking this morning?’ And it takes a few years before you’re strong enough to be able to get over this fear. But after a while your brain is used to pressure. You have to write some music every day, and that’s become a discipline. You throw a bucket in the well and you bring the water out. There’s no other way. You have to do it.

Desplat has worked with many directors — Wes Anderson, Angelina Jolie, George Clooney, Ben Affleck, Stephen Frears, Kathryn Bigelow and Nora Ephron, to name a few — and says even though his name is on the scores of the films he works on, the process is a truly collaborative one.

I sit down with the director in my studio, I play piano, I make little electronic demos with the orchestration already laid out, and we discuss. We try to picture what the movie is calling for and what the director is aiming for. I’m here to collaborate. I’m not here to create my own piece of music.

Desplat has yet to win an Oscar. With double the chances, will this be his year or is he destined to be the Susan Lucci of the scoring world? Desplat doesn’t seem too hung up on it one way or the other.

You do movies because you love movies and you write music because you love writing music, and sometimes there’s this magic combination. The vibration of the music is so strong that when people hear it and they watch the film, they want to nominate you. But there’s no guarantee and that shouldn’t be the goal ever. The goal is to make a great piece of music that will serve the movie and can stand alone at the same time. That’s the only way I can think about it. 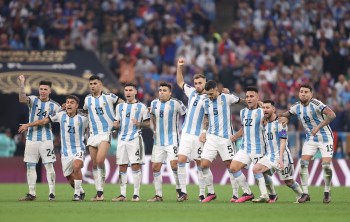 What the World Cup can teach us about game theory