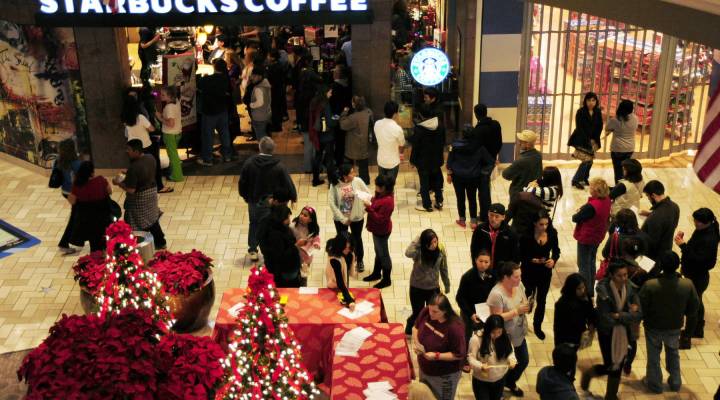 Holiday drinks: A mix of science and clever marketing

COPY
Shoppers wait in line at Starbucks while shopping at a Black Friday event. KAREN BLEIER/AFP/Getty Images
Brought to You By

Holiday drinks: A mix of science and clever marketing

The flavor was the one customers liked best during taste-testing. While it does not feature chestnuts, the drink does contain smoky chestnut flavoring. That, along with caffeine, sugar and fat, make for a holiday mix that packs a whole lot of nostalgia.

“It really is reminiscent of, you know, chestnuts roasting on an open fire,” Mills says.

“Food marketing people are trying to take advantage of those warm fuzzy feelings, and they have been very successful,”  says MaryAnne Drake, a food scientist at North Carolina State University.

It’s not just clever marketing. There’s some science behind our attraction to these flavors.

The secret, says Drake, is in the scent.

The aromas in these holiday products are crafted to trigger emotions and feelings, she says. In the last five years, scientists have made huge steps in understanding how scents affect us neurologically. And the feelings aroused aren’t always warm, fuzzy ones.

“There was a study,” Drake says, “where they actually – forgive me for being indelicate – hooked up men and their private parts and then had them smell particular things to see which evoked the best response from their private parts. And pumpkin pie spice had a really strong response.”

Pumpkin  kicked off this modern holiday flavor craze about a decade ago, Drake says. Starbucks, for example, has sold over 200 million pumpkin spice lattes since releasing the drink in 2003.

Pumpkin is pretty much over now that it’s late November. Companies are signaling the coming of winter with a whole new series of flavors. Market analyst Robert Eckard says some of the big ones this year are salted caramel, pecan pie, peppermint patty, sugar cookie and dark chocolate cognac. There are also some more surprising flavor trends this year, like mescal and smoke.

Companies have been playing with seasonal flavors for decades, Eckard says, but now chain corporations can afford to hire specialized flavorists who concoct powerful and addictive tastes. Flavoring has grown into a $2.7 billion industry, and seasonal drinks are a big part of it.

Eckard likes to call them “liquid deserts, or holiday in a glass.”

While corporations can giveth, they can also taketh away. Starbucks was going to stop serving its eggnog latte at certain locations this year but rethought the move after the company was flooded with letters. Customers complained that Christmas just wouldn’t be Christmas without it.

So we have a new tradition: the commercially-developed, scientifically flavored, holiday beverage.