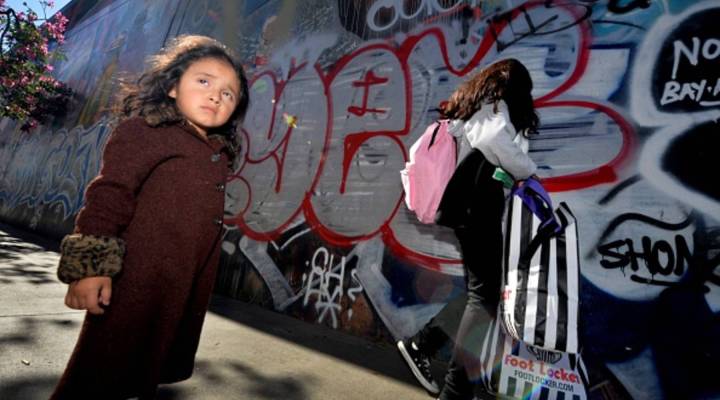 The number of homeless children is on the rise

COPY
Three year old Saria Amaya (L) waits with her mother after receiving shoes and school supplies during a charity event to help more than 4,000 underprivileged children at the Fred Jordan Mission in the Skid Row area of Los Angeles. (Mark Ralston/AFP/Getty Images)

The number of homeless children is on the rise

The numbers represent a historic high and the root causes are primarily economic.

The study, published by the National Center on Family Homelessness, finds that as many as one in thirty children are homeless at some time during the year, an increase of 8 percent.

“The largest group is families that are doubled up and living place-to-place. They’re moving in with families and friends, and they’re kind of moving around a lot,” says Carmela DeCandia, Director of the National Center on Family Homelessness.

DeCandia says part of the reason for the shockingly high numbers is that previous studies on child and family homelessness often didn’t count families living outside the [homeless] shelter system.

High living costs are a particular problem in California, which accounts for more than one-fifth of all homeless children in the country, nearly 527,000.

According to the report, California’s high cost of living means an average two-bedroom apartment in California costs $28/hour in income.

“Which means that that even if you had two parents working at minimum wage, they would still not be able to afford that kind of apartment,” notes Colette Auerswald, a pediatrician and professor at the UC Berkeley School of Public Health. Minimum wage in California is $8/hr.

Auerswald says homeless children need to become a funding priority for state and federal agencies, much like chronically homeless adults and homeless veterans.