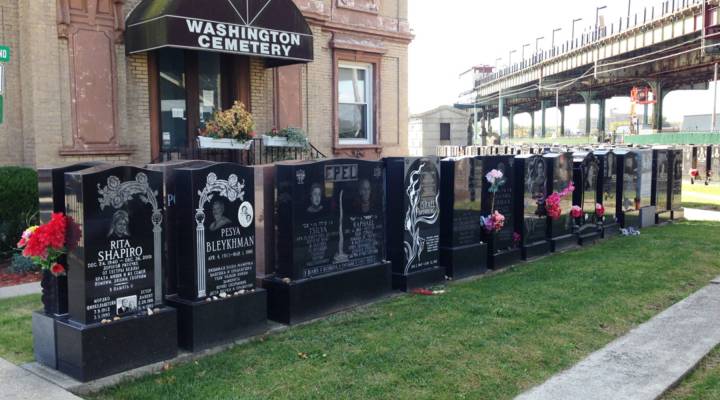 How do cemeteries make money?

How do cemeteries make money?

Even the front lawn of Washington Cemetery is crammed full of plots.  Tracey Samuelson/Marketplace
Listen Now

At Washington Cemetery in Brooklyn, a weed-whacker sends a spray of grass clippings into the air, as the ground crew weaves in between black and grey tombstones packed so tightly they almost touch.

Washington Cemetery is sold out, though not all of its plots are occupied yet. It has already squeezed out every single possible plot – shrinking the parking lot, tearing up roads, even offering up a small lawn in front of the office.

“It’s an odd business setup, you know,” Ciamaga shrugs, surveying a stretch of newer glossy-black graves etched with portraits of the deceased.

State laws require that many cemeteries put a certain amount of their proceeds from the sale of plots into an endowment to support it once it’s sold out – much like a 401(k). But while a retirement plan has to support a person for a few decades, this money is supposed to fund the cemeteries forever.

“Forever is a pretty big promise,” says John Llewellyn, the chairman of the board of the Forest Lawn Memorial-Park Association and author of a book called, “A Cemetery Should Be Forever.”

Llewellyn worries that many cemeteries won’t be able to keep that promise.

“Not all cemeteries put aside enough money,” he says. “Some are not required by state law to put aside money. In other instances, the state sets certain minimums are that inadequate.”

Just like people need to sock away as much as possible in their prime earning years, Llewellyn thinks cemeteries, many of which are non-profits, should be saving more. He says the best time from cemeteries is two or three generations into its life, when the high start-up costs of land, roads, and irrigation systems are behind it and revenue from sales starts really flowing.

Celebrating its 150th anniversary this year, Woodlawn Cemetery in the Bronx already houses 300,000 people and there’s space for tens of thousands more on its rolling hills.

“We are going to cater to every case, whether it be an individual on social security or somebody that’s a multi-millionaire,” says Woodlawn’s executive director David Ison. “We have to have pricing structures to fit all needs.”

Options range from cremation to a private mausoleum available for $4.6 million.

Density is key, says Ison. On a little less than an acre of new space, Woodlawn be able to fit 2,500 new people, a mix of burials and cremations.

Back in Brooklyn, Washington Cemetery looks at a lot different from the Bronx. It’s under a subway line in a much more urban area, but it’s still popular with local residents.

“I couldn’t, like, emphasize enough to you how people desperately want to be buried here,” says Michael Ciamaga.

He’s hoping a new section the cemetery’s opening will help it emerge from its forced retirement.

“With the Staten Island section that we’re opening, we’ll be good for, you know, anywhere from 10 to 15 years,” he explains. “After that, I have no idea.”

It’s relatively rare, but cemeteries can fail. On average, eight cemeteries have been abandoned in New York State each year since 2001, according to the state’s Division of Cemeteries. They generally become the responsibility of the town, though they may also be taken over by another cemetery.

Ciamaga says if Washington runs out of money, they’ll close the office, cut the maintenance staff, and maybe just keep on a gravedigger until all its “reservations” have been filled.