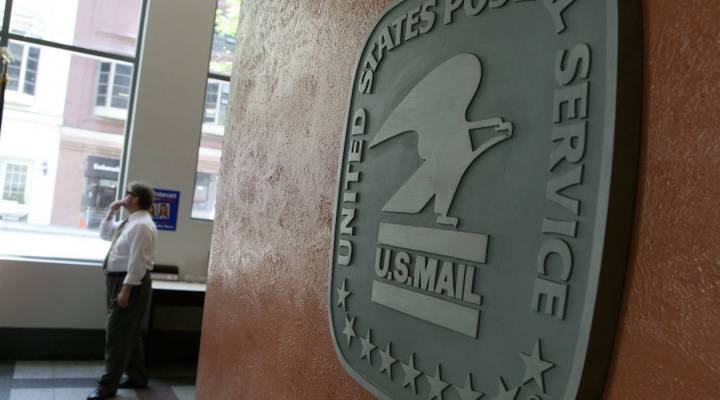 Why we should bring back the Postal Banking system

A man walks by a sign in the lobby of a post office in San Francisco, California. Justin Sullivan/Getty Images
Marketplace Whiteboard®

Why we should bring back the Postal Banking system

A man walks by a sign in the lobby of a post office in San Francisco, California. Justin Sullivan/Getty Images

When I was 12 years old, my Mum presented me with a little blue plastic-covered book with the design of a key on it.

It was my first savings account, provided by the British Post Office. There’s no way that I would have been able to open an account with a bank, given the paltry amount of money I wanted to save, or the zero amount of money that I earned. But the Post Office didn’t care that how skint or young or unemployed I was: it was determined to provide me with banking services, regardless. That savings account really did operate like a key. It helped me understand all sorts of thing about personal finance, including the magic of compounding.

I mention this because I just read a fascinating article about the history of the postal banking system in the US. First off, I had no idea that there used to be a postal bank system in America, but there was. And just like the Post Office in the UK, it was aimed at  providing banking services to people of modest means. The kind of people who today are widely denied access to banking services, and who are forced instead to reply on payday lenders.

The post office offered information to customers in 24 languages and would pass out leaflets right outside the ports of entry into the U.S.

The author points out that the rise of payday lending coincided exactly with the decline in postal banking. That began around 1965, when the postmasters general began to endorse ending it. The system died a quick, quiet death, which coincided with banks’ withdrawal from low-income (and thus low-yield) neighborhoods in the early 1970s. That created a financial services vacuum, which was quickly filled by, you guessed it, payday loan operations.

The problem is that postal banking is expensive. It’s a low-margin business, after all, as most customers probably won’t have much money to save, and the post office would find it tough to upsell its banking customers into higher-yielding products, in the way banks do. It’s also administratively expensive: a recent British government report on the unbanked in the UK found the cost of a simple banking transaction at the Post Office was about 100 times more expensive than a similar transaction done at a bank.

Of course, that’s not really the point. The point is that in the U.S. there are large sections of the population that are denied banking services, not because they don’t understand how to use them, but because the banks have rejected them and the government has deserted them. As such, they are preyed upon by unscrupulous payday lenders, and often left even more disadvantaged than before.

The government has tried a private sector solution, demanding the banks set up shop and provide banking services in these neighborhoods, but the private sector has failed. Which leaves it up to the public sector.

Postal banking is a possible solution. It will be expensive, as most public services are. But the alternative, in the long run, will surely cost us more.