In prison and getting an education

In prison and getting an education

In a ground floor classroom, dark but for the glare of fluorescent lights, about a dozen men are discussing “The Odyssey.” They’re talking about the part where Odysseus comes home after being away for so long.

It’s hard not to imagine that the story has an added poignancy for them, students in the Bard College program at the Woodbourne Correctional Facility, a medium-security prison inupstate New York.

Earlier this spring, New York Governor Andrew Cuomo presented a new plan for higher education. Citing the cost savings of preventing recidivism and helping newly released inmates find jobs, he said that New York planned to set up—and fund—college programs at 10 prisons around the state. Soon after, though, some New Yorkers began complaining that it was unfair for the state to fund education for prisoners, when many middle class families are struggling to pay for college. The plan was dropped.

But the Bard Prison Initiative has been offering college courses — and degrees — to prisoners around New York State since 1999.

It may sound abstract, said BPI’s founder and director, Max Kenner. But he thinks a liberal arts education is a better investment than many vocational training programs.

“Nothing prepares people for the challenges of the workforce like a liberal education,” he said.  “Liberal education is the best vocational education we can provide, because it trains people to respond to the dynamics of their circumstances.”’

The sample size is small — Bard only has about 278 graduates. But Kenner says that of the alumni the college is still in touch with, around two-thirds of them have gotten jobs and/or continued their educations after leaving prison.

And he says the actual cost of running college programs in prison is cheap.

“The round number that we’ve come up with is roughly $5,000 a year,” he said. “And that is books, teachers, and the administrative cost of staff or the people who oversee the programs.” (Part of the reason it’s so much cheaper than regular campus-based programs is that it a lot of the fixed costs, say for the physical plant, are a already covered.)

The Rand Corporation did a study recently, looking at all the studies that have been done about the benefits of prison education. Lois Davis, one of the report’s authors, says she found the real economic benefit of educating inmates is that education makes people less likely to recidivate.

“For every dollar spent on correctional education programs, you save about four to five dollars on reincarceration costs,” she said. “That’s a huge difference in terms of cost-effectiveness.”

Having a job is another thing that helps keep people from coming back to prison, but having a criminal record can make it hard to get a job.

Francisco Feria, who’s been incarcerated since he was 16, for robbery and assault, got his GED when he was in the county jail. Now 24, he hopes his Bard degree will help him get a job when he gets out of prison.

“College or not,” he said. “I’m still considered a felon. I’ve committed a crime. And that’s always going to follow me throughout my whole life, but I just think that college just boosts that chance that much more.”

Feria got his associate’s degree this spring, and plans to spend the last two years of his sentence getting his bachelor’s. 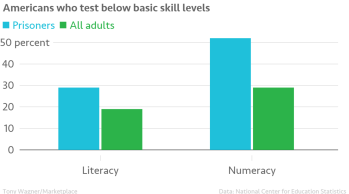 Chart of the day: Education in prison