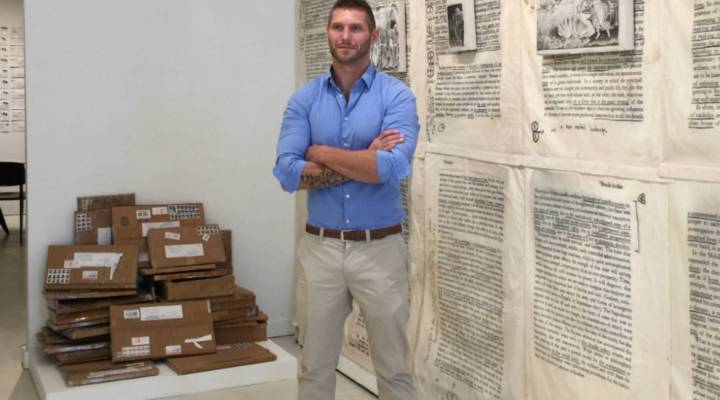 There was an art opening in New York city on Thursday night, featuring the work of Pennsylvania artist Jesse Krimes. Work that he happened to create on the sly, behind bars, during his nearly six years in prison.

As it happens, his New York opening comes as JPMorgan Chase agrees to pay $446,822 to settle a lawsuit from former inmates, including Krimes — the lead plaintiff in the case. The financial services firm issued them debit cards to help them get back on their feet, but inmates say that JPMorgan charged them exorbitant, sometimes hidden, fees.

Krimes joined Marketplace Morning Report host David Brancaccio to talk about the controversy and his artwork.

On first receiving the debt card:

So first off, when I open the envelope, the card has a mug-shot picture of yourself on the front of your card. You know, you’re going to be identified as a convicted felon for every purchase that you make. And you already feel really stigmatized so this is just another reinforcement of that. So typically you get the card and you want to maybe stop and get some snacks, because you haven’t eaten real food in five, 10, 15 years…so you stop, you use the card, maybe you pull some money out so that you have cash once you’re in the halfway house. So you don’t notice anything right away because you have a very small window of time to get to that halfway house.

On the debit card’s fees:

It took me a while to figure out that, you know, they were actually charging these exorbitant fees because when you’re in a halfway house, you don’t have access to the internet or a computer either. So you’re using this card the whole time, you know, without any real understanding of the fees that are being charged to you. Even if you go to an ATM and you withdraw money, it only lists the actual ATM surcharge, not the fees from Chase Bank itself.

How Krimes felt when he heard JPMorgan Chase agreed to pay nearly half a million to ex-prisoners:

Good. I mean, obviously it’s kind of a drop in the bucket for Chase bank. But again, it’s not about that for me. It’s not about the final sum, it’s about setting a precedent to curtail this predatory practice that they had going on with the Federal Bureau prisons and the United States Treasury Department. So, you know, it felt really good to be able to not only stand up to this bank, but be able to kind of recoup these fees for everyone else who’s been released from federal prison.

On the art materials he’s used:

The first project, “Purgatory,” I began collecting prison-issued soap, and carving them down into these little slivers of soap that I would then transfer images of offenders out of the newspaper onto the surface of the soap. And then house them in these…decks of playing cards, then I would smuggle them out through the postal service. So over my six years of incarceration, I made various bodies of work using the materials of the prison to kind of reveal some of these hidden systems and structures and power dynamics that were being enacted upon me and the other inmates within the prison system.

Why he used prison bed sheets for some of his projects:

The reason why I selected this material is because it’s also produced in prison in a program called UNICOR, which is the Federal Bureau of Prisons’ production arm. They use inmate labor to not only produce these sheets and other materials to keep the prison self-sustainable, but they have long since branched out into making other products like furniture and electronics and even solar panels… these guys are made to work at anywhere from 23 cents to a $1.17 an hour over really long extended periods of time. And who knows if these skills are even transferable once you come home… So, there’s this very large, confined workforce within the federal prison system and these…UNICOR facilities are spread all across the country and they make millions of dollars in profits every year.

A glimpse at another of Krimes’ art projects.