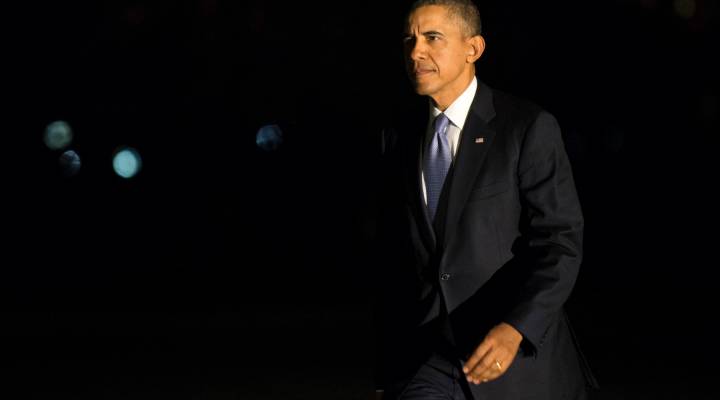 COPY
U.S. President Barack Obama returned to the White House after a day trip to New York on March 11, 2014 in Washington, D.C. The president attended two fundraisers and shopped at a Midtown Manahattan Gap, highlighting the retailer's policy of paying entry-level employees more than the federal minimum wage. No word on whether or not he was paid overtime. Getty Images News

U.S. President Barack Obama returned to the White House after a day trip to New York on March 11, 2014 in Washington, D.C. The president attended two fundraisers and shopped at a Midtown Manahattan Gap, highlighting the retailer's policy of paying entry-level employees more than the federal minimum wage. No word on whether or not he was paid overtime. Getty Images News
Listen Now

What’s in a name? A lot, if you’re talking paychecks. Names – or job titles this case – are at the center of a new push President Obama is making to get overtime pay to more workers. He’s challenging ru:les put in place a decade ago that allow companies to avoid paying certain workers overtime if they classify them as executives or professionals.

“Misclassification is a big one,” says Heidi Shierholz, labor economist at the Economic Policy Institute. She says there are a lot of ways companies have been keeping wage costs low, like classifying people as executives or independent contractors. “Even though they’re technically employees, if they’re classified as independent contractors, the employers don’t have to pay workers’ comp [or] unemployment insurance, they don’t have to pay minimum wage or offer overtime.”

Shierholz says incidents of so-called wage theft have also been on the rise. “An example of this is when you work at a fast food restaurant and it’s 2 in the morning and your employer says: ‘Clock out and then clean up.’ That happens a lot.”

This isn’t just a post-recession trend. These wage workarounds have been on the rise since 2000. “I think the labor market has tilted the labor playing field in the direction of employers,” says Harry Holzer, professor of public policy at Georgetown University. “There’s just a lot more ways for them [employers] to get the work done that they need to get done.”

Namely, technology and outsourcing: Employers use technology to replace a lot of jobs and can go overseas for cheaper labor.

The weak labor market has only made things worse for workers. “When you have three workers for every available job, that enhances employers’ leverage to lower the norms and the treatment of their workers — and that’s what they’ve done,” says Michael Hillard, professor of economics at the University of Southern Maine.

But Hillard says wage stagnation isn’t entirely good for companies. When workers get paid less, they have less to spend — which limits long term growth for many firms.