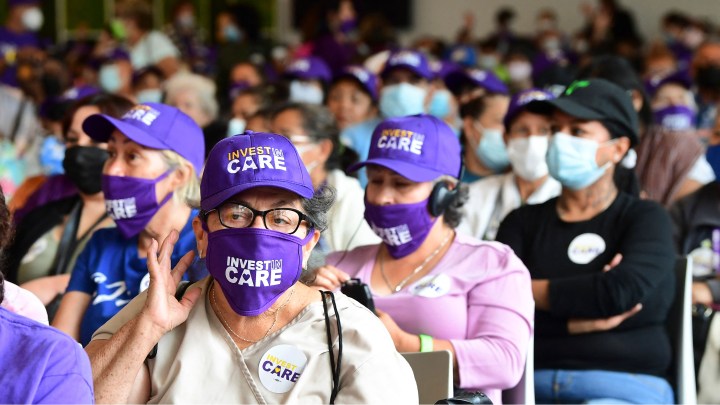 The pandemic has made clear how essential caregiving is to people’s lives and to the economy. Yet the people who do this work are often paid low wages and denied basic protections.

The U.S. Department of Labor is aiming to address some of these concerns for home-based health care workers with the launch of a new initiative to increase outreach, education and enforcement around care workers’ rights, like minimum wage and overtime.

There are about 2.3 million home-based personal and health care workers assisting seniors and people with disabilities in the U.S. The workforce is almost 90% women, nearly two-thirds women of color, and one-third are immigrants. They make an average of $13 an hour, according to Lul Tesfai, senior policy adviser with New America.

“Nearly half of all home care workers live in a low-income household, and 1 of 6 workers lives below the federal poverty line,” she said.

“It’s just commonplace for workers to get abused because they get paid by cash a lot of times,” he said.

Like most domestic workers, home care aides had historically been excluded from federal job protections, like overtime pay, under the Fair Labor Standards Act. However, the Barack Obama administration moved to include them in 2015.

Actually applying the law can be challenging, said Caitlin Connolly with the National Employment Law Project.

“Many times, workers are going directly to people’s homes and aren’t in fact meeting at a central workplace talking with other co-workers,” she said.

It’s also not always clear who the employer responsible is when workers are hired jointly by an individual but paid through an agency. That’s why outreach efforts need to target all groups, said the Department of Labor’s Jessica Looman.

“We’re doing an employer association-focused outreach. We are doing outreach for advocates who represent these types of workers,” she said, “which includes a series of webinars and listening sessions, public service announcements and posters in your local bodega.”

We should care about the troubled “care economy”