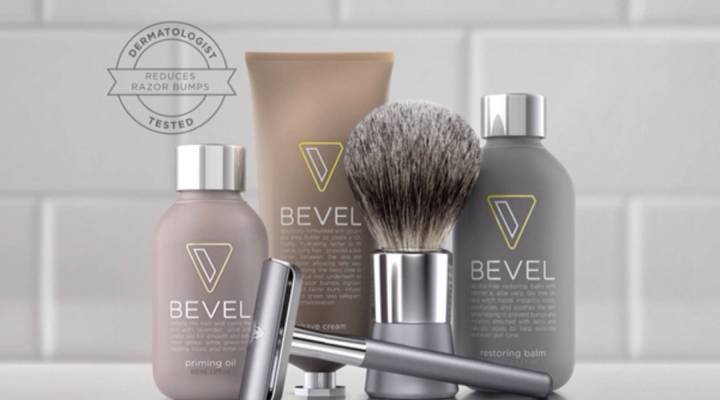 Twenty-nine-year-old Tristan Walker is a classic overachiever. He was valedictorian of his college class, earned his MBA from Stanford, and worked in business development for Foursquare. Still, for most of his adult life, Walker had trouble doing something that millions of men do every day: shaving. He was plagued by razor bumps and skin irritation.

“I know what it feels like to walk in on your first day on the job, having folks tell you to shave that hair off your face and being mortified,” Walker said. Fellow sufferers include many African-American men, and others with curly hair.

“Traditional mass-market brands today sell multi-blade razors, and a lot of times that’s the culprit,” Walker said. “Because multi-blade razors will cut the hair underneath your skin. Which is just going to cause your coarse, curly hair to grow back in to your skin.”

Under the umbrella of Walker and Company Brands, he recently launched Bevel, a line of shaving products targeted specifically to men of color. Some of Walker’s investors are no doubt impressed by his experience in Silicon Valley. And with recent studies projecting that African-American buying power will reach $1.1 trillion next year, Walker thinks the time is ripe for companies seeking to market products to Black consumers.

“As the demographic continues to grow, continues to have influence in this country, I think a lot of folks will have to take note,” Walker said.

One of those taking note is Cheryl Pearson-McNeil, a Senior Vice President of Public Affairs and Government Relations for the Nielsen Company, who, in 2011 proposed the idea of looking specifically at what African-American consumers buy, watch and listen to. Nielsen produced surveys in 2011, 2012, and again last year in a report entitled “Resilient, Receptive and Relevant,” which offers a glimpse into a largely youthful, connected, media-savvy market.

“The black population is young, hip, and highly influential,” Pearson-McNeil said.  The question though, is whether companies and advertisers recognize this. Pearson-McNeil says that of seventy five billion dollars a year spent in TV, print, internet and radio ads, “only three percent of that is being spent with black media or with media that targets black audiences.”

McNeil says that rather than one-size-fits-all marketing strategies, companies can do a better job of connecting with Black consumers by featuring African-Americans more prominently in advertisements, and by trying to develop an authentic connection with consumers.

“If people can see themselves, it does help move the needle to where they will respond to your brand,” Pearson-McNeil said.

Tristan Walker appears to understand this well. An online commercial for Bevel, whose first shipment of products went out this month, features a thirty-something African-American man conducting his morning routine in a beautifully-appointed apartment. A voiceover tells us Bevel is a shaving sytem, “that we can use.”