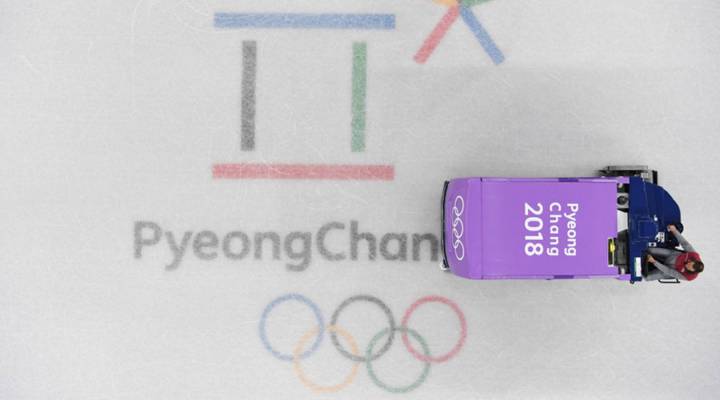 COPY
The Zamboni machine resurfaces the ice during the Pyeongchang 2018 Winter Olympic Games, at the Gangneung Ice Arena in Gangneung on February 10, 2018. MLADEN ANTONOV/AFP/Getty Images
How to be a...

The Zamboni machine resurfaces the ice during the Pyeongchang 2018 Winter Olympic Games, at the Gangneung Ice Arena in Gangneung on February 10, 2018. MLADEN ANTONOV/AFP/Getty Images
Listen Now

Everyone has a dream job growing up: doctor, vet, ice cream taste tester. But how do you actually get the gig? Marketplace Weekend is looking into how, with the occasional series, How to be a…

Ryan Hevern is an ice technician at the Schwan Super Rink in Blaine, Minnesota. He also works part-time driving Zambonis at Minnesota’s 3M Arena and is currently working at the Winter Olympics in Pyeongchang, South Korea. He started driving a Zamboni right out of high school and has been working on the ice for eight years.

It’s very intimidating driving a giant ice machine around on slippery ice. So you kind of develop a sixth sense to where the machine is, because you’re sitting in the back of the machine, rather than in the front.

Shave, wash and flood: Those are the three principles for making good ice. You shave it with the blade — it’s kind of like a printer’s blade, for cutting stacks of newspaper. It’s very, very sharp. So that shaves the top part of the ice. And then you have wash, so there are these two jets of water that are sprayed on the ice and kind of mix around on top of the ice, and then it gets retrieved with a pump system, so pulls all the dirt and grime and the extra snow in the skate cracks. And then you have flood, which is basically a layer of hot water that’s applied with a towel. And that’s the water you see coming out of the back of the machine. A lot of it’s about timing.

I’d say it took me about two, three years to get really good at driving. Luckily at the Schwan Super Rink, we do a lot of ice there. We have eight rinks, and there’s tournaments going all the time, and we work long hours. You get good pretty quick working there.

Good ice — you can’t really know exactly what good ice sounds like until you just know what good ice sounds like. I’ll say it’s crisp. You know, you watch someone come in and skate, you see the powder go up into the air. If there’s powder floating into the air, you know your ice is cold, and it’s good. If they’re skating around, and it kind of sounds like they’re stepping on slush, then you know that’s not very good. You kind of just develop an ear, and just a feeling for it, and then you talk to the players, you ask them what they thought of it. A lot of it is just a slowly developed skill over time.

Teamwork is everything. You’ve got to make sure you’re on the same page. When you’ve got two machines on the ice, you’ve both got to be doing relatively the same thing. If one person is not shaving, and another person’s shaving more, the ice won’t be uniform across. You’re looking for consistency.

I actually did not skate or play hockey growing up. I can skate. You probably don’t want to see me on skates. But it’s kind of just a family thing. My dad took care of an arena when I was young, and he moved over to work at the Schwan Super Rink, and when I turned 18, that’s just kind of how it went. And I haven’t looked back, and it’s just been the time my life. And now I’m at the Olympics. He’s very proud of me.

He taught me how to drive Zamboni on rink six [at the Schwan Super Rink], which is actually the USA Women’s National Team home rink. And I actually lost my voice screaming so loud because of the gold medal that they won. That was probably one of the best moments of my life, was to stand there and watch it actually happen with my own eyes. That was  unreal. And to be with a couple of the guys that I worked with from Minnesota, to experience that with them, is one of the best moments of my life and I will never forget it.