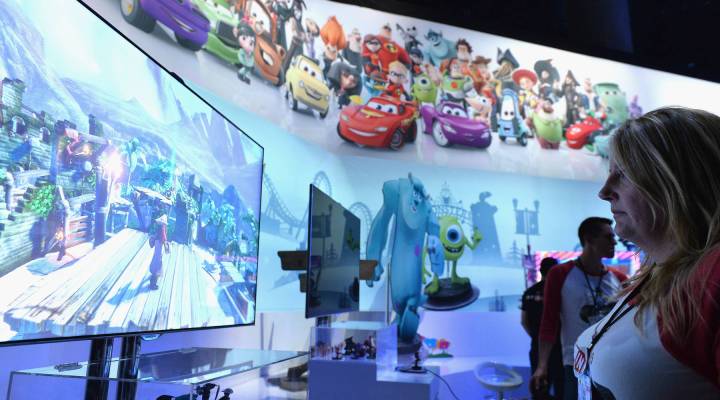 COPY
A fan tries out the Disney Infinity display at the E3 Gaming and Technology Conference at the Los Angeles Convention Center on June 11, 2013 in Los Angeles, California. Alberto E. Rodriguez/Getty Images

A fan tries out the Disney Infinity display at the E3 Gaming and Technology Conference at the Los Angeles Convention Center on June 11, 2013 in Los Angeles, California. Alberto E. Rodriguez/Getty Images
Listen Now

On Sunday, Disney will release its Infinity video game for children. The company is hoping for the kind of reception normally reserved for its popular movie franchises. Disney hasn’t had tremendous success with video games, but Infinity will combine new technology and familiar characters — and Disney is hoping for a bit of magic.

The game comes with figurines- – a couple inches high — of Disney and Pixar characters. Gamers plug the figurines into a game pad, and, with the help of a microchip, they appear on screen.

Only Activision, with its enormously popular Skylanders games, is doing something similar. Analysts say Activision is cashing in. “I think the only phrase you can use is ‘hand over fist’,” said Matt Hudak, an analyst with Euromonitor International. “It’s incredible.”

Where Disney’s Infinity has an edge is that its characters, and Pixar’s, are easily recognized by children. What’s more, they’ll be able to interact in the same game , allowing, in theory, Captain Jack Sparrow and Captain Hook to to wreak havoc with the crew from Monsters Inc.

Richard Gottlieb, President of Global Toy Experts, says toys are changing. The lines between a purely physical toy (like a doll) and a purely virtual one (like a videogame) are blurring “as everyone tries to find ways to integrate the real world with the virtual world.”

And that, he says, will probably change the way children play.