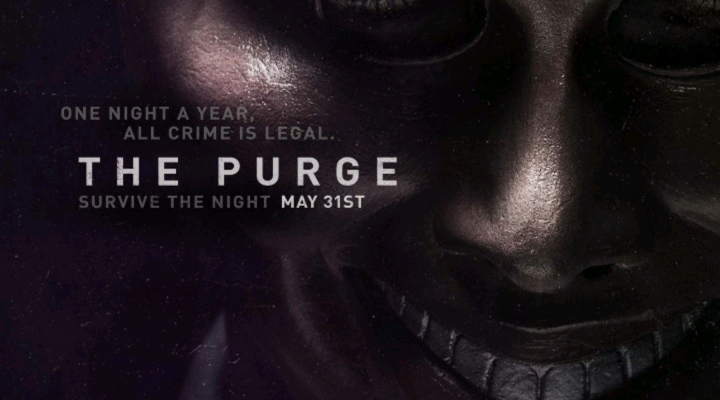 The only way to protect yourself from ‘The Purge’? Money

Movie poster for "The Purge." Universal
By The Numbers

The only way to protect yourself from ‘The Purge’? Money

Movie poster for "The Purge." Universal

“Survive The Night” is the tagline of a new horror film called “The Purge” opening in theatres this weekend.

The film is about an America set in the very near future (about 10 years from now) where one night a year, all crimes — including murder — are legal.  The idea is that “purging” allows people to release the innate need all humans have to be violent. Weird, because if there were actually a purge, I’d think most of us would just dine ‘n’ dash at a fancy eatery or go streaking at a sporting event.  But maybe I should keep a close eye on my fellow Americans because, in the film, most people are after blood.

Not our protagonist, of course.  The movie focuses on James Sandin, a nouveau riche home security salesman who has hit it big in purge-times for obvious reasons.  He sells the best alarm systems.  Those who can, buy them.  More on that later.

Every year, James locks his family down in what is essentially a mansion-sized panic room where no one gets in or out without disarming the intricate, steel-lock system.  What’s interesting is that except for the night of the annual purge, it seems the family leaves their doors unlocked (early on in the film, an intruder easily manages to stow away inside the Sandin house unnoticed).  And that’s understandable — the Sandin family lives in a world where there is only a 1% crime rate. That’s right, the purge is so successful that crime has all but disappeared!

So, back to this home security system. Remember what I said about being able to afford one also affords you protection from murderous members of your community? Well, it’s easy to guess who has been virtually eliminated in this new American society: the poor.  Those impoverished people who remain are the main victims of purge-night violence.  In fact, it is an unexpected encounter between the Sandins and a homeless man that drives the plot of the film.

Purge or not, the cost of staying safe

That got me wondering about home security systems and how much we spend to protect ourselves in our very real, crime-ridden society.  I grew up in Atlanta in the 1980s in a house with a “burgular alarm,” as my mom called it, so I was surprised to learn that only 20 percent of American households today have them. I imagine that number would go up significantly if our government implemented a purge.  But, with our current violent crime rate on the rise, I guess I thought there’d be more.  And soon there might be.

Time Warner, Comcast Corp. and, and of this week, DirectTV have all entered the home security game.  Wait, what? Cable TV providers are now providing alarm systems? Well, with more of us ditching our cable bundles and turning to pay-TV alternatives like Netflix and Hulu, these companies are figuring out new ways to keep their customers.  Voila! More competition in the home-security game.

Thinking about getting a home security system? Well, it’s not cheap.

Time Warner’s IntelligentHome program starts at $33.99 a month and Comcast’s Xfinity systems kick off at $39.95 per month.  ADT rings in somewhere in the middle at $36.95/month, but that’s on top of a $99 installation fee.

So, can most people afford to protect themselves? Maybe that’s why only about 1 in 5 homes have a security system.  But the good news is, there are other ways to keep you and your family safe from crime. They include upgrading to high-security locks, setting light timers and working with your neighborhood watch (or starting one) to help you “survive the night.”

Another film opening up this weekend: “The Internship.” For tech reporter Queena Kim’s review, click here.