When it comes to work, are you a giver or taker?

When it comes to work, are you a giver or taker?

We often think of the guy or girl who gets ahead at work as being the sort of person who’s super self-confident, happy to sing his or her own praises. But it turns out that that’s not always right. Adam Grant is professor at The Wharton School and author of the new book “Give and Take.”

“You can think about a spectrum that has, on one end, the takers who are always trying to get as much as they can from people. On the other end, we have the givers who actually enjoy helping others and frequently do it with no strings attached. If you look at a range of professions from medicine to engineering to sales, the givers are frequently in last, but they’re also frequently in first [of the success spectrum].”

Grant says there’s an amazing group of people of helpful and generous people who manage to succeed in ways that lift other people up instead of cutting them down. One of the most common misconceptions about being a successful giver is that it doesn’t always mean being nice.

“There’s this whole category of people who I call disagreeable givers, who might be really gruff and tough on the outside, but at the end of the day really have your best interest at heart,” says Grant.

Grant says that successful givers are thoughtful about who they give to. It’s dangerous to give to takers who will exploit you frequently. He says it’s more productive to help givers who are most likely to paid it forward. But there’s also a third group of people: matchers. Matchers look for an even balance of give and take, quid pro pro. Givers who help matchers find that matchers are the ones who really reciprocate and pay it back.

But doesn’t giving — helping everyone who needs some help — make your work day longer? Grant says you need to be strategic about it. He says it might be worth doing a five-minute favor — going out of your way to help somebody else in some form that is high value to them, but at low cost to you. For example, introducing two people to each other who could benefit from knowing each other or writing a letter to somebody’s boss praising them.

So how do you balance competing work requests when time can’t accommodate both? What do you do when you want to be a giver, but just don’t have time to do all of the giving that you feel you’d like to do?

“First thing I would say is you want to ask: Where can I have the most distinctive impact? Can I make a distinctive contribution here? Or if not, then I’ll connect this person to somebody else who’s equally or better suited to help,” says Grant. “I think a second one is to think about, OK, every time that you help somebody else, you’re potentially making an investment and encouraging them to be helpful as well. So I would want to make that investment with people that you think can bring maybe the greatest return — not necessarily back to you, but who might pay it forward the most.”

One piece of advice that Grant wants to leave with listeners: Successful givers are quite comfortable asking for help. Try to create a norm for yourself or people in your workplace that it’s OK to ask for help if you need it, so that people can step up and support each other. 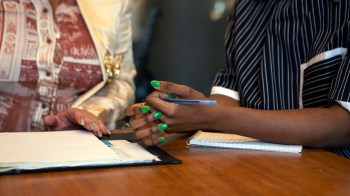