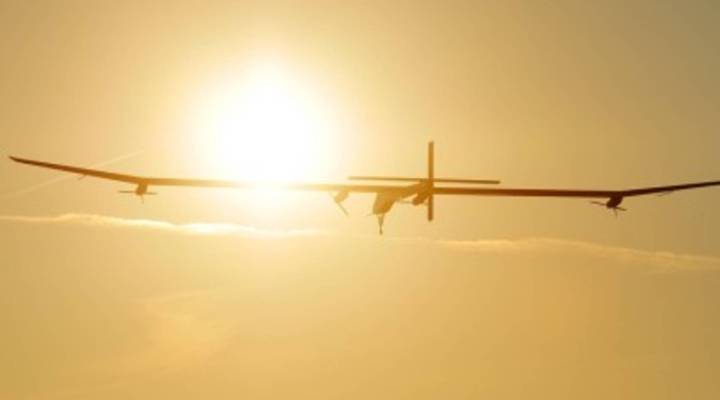 This week, one of the world’s first solar powered airplanes is scheduled to leave Arizona in the second leg of its cross country tour. But don’t expect the Solar Impulse to make the trip in record time. A recent flight from Northern California to Phoenix took 18 hours.

The Solar Impulse is the brainchild of two private investors from Switzerland, Bertrand Piccard and André Borschberg. The two will fly their own aircraft coast to coast. The plane only travels about 58 miles an hour, but Piccard says he’s happy with that.

“The goal is not to arrive as soon as possible because what is interesting with Solar Impulse is not the speed, it’s the duration,” Picccard says.

The on- seat plane is powered by four electric propellers. The pilot wears a parka to stay warm and an oxygen mask to breathe 30,000 feet up. It uses 12,000 solar cells made of material as thin as a human hair, and the airplane only weighs about as much as a Prius. The solar panels cover the top of the plane’s really long wings. Piccard says they’re as wide as the wingspan of a 747.

“You can theoretically stay airborne forever because during the day the sun is enough to power four electrical engines and to load the batteries so it can continue to fly at night,” he says.

Will Solar Impulse change the course of aviation history? John McDonnell, founder of the Arizona Solar Tech company Sun Renu says someday, we might see hybrid planes that use gas and solar.

“We can start incorporating this technology into commercial airlines,” McDonnell says. “Now, it will never get to run a jet by itself, however it will reduce the carbon footprint of the flights.”

The inventors of Solar Impulse acknowledge planes powered by the sun won’t take over the aviation industry. Piccard says they just want to get consumers excited about going green.

“What we’re doing is an investment to encourage other people to use the same technologies as us in order to reduce their energy consumption for their house or for their cars,” says Piccard.

The plane’s been parked longer than expected in Phoenix because the crew wants to dodge tornadoes in Texas, it’s next stop. It is scheduled to complete its cross country flight next month in New York.