So we’ve got three budgets, but is there any overlap?

So we’ve got three budgets, but is there any overlap?

We got President Obama’s budget today, a couple of months late. In it, the president lays out his plans for FY2014. It comes on the heels of the Senate’s budget, and the House of Representatives’ budget.

So, we’ve got these three thick documents. Do they have anything in common? Well, they’re all in English. That’s something.

According to Ross Baker, a professor of political science at Rutgers, for the most part, the similarities end there.

“You kind of put them together side by side, and it’s sort of like setting up a dinner party for a vegetarian, a vegan, and somebody who is on the Paleo Diet and eats nothing but meat,” he says.

I spent about 20 minutes at the printer today, printing out copies of the House’s budget, the Senate’s budget, and the president’s budget. Altogether, they are 478 pages. That’s about a ream’s worth of paper. And in all that, there’s not much overlap.

“Both of them call for tax increases on upper-income Americans,” he says. “The Ryan budget does not have that.”

That’s the House’s budget, drafted by Rep. Paul Ryan (R-Wis.). It calls for reforms to entitlement programs, including Social Security. There’s some of that in the president’s plan, but not in the Senate’s.

Even though we have three different budgets, Matthew Shapiro says he is “cautiously optimistic.”  He is the Lawrence R. Klein Collegiate Professor of Economics at the University of Michigan. “It’s a positive step that concrete proposals are on the table,” he says.

But will any of those proposals become law? That’s anyone’s guess.

The Obama administration defends its budget tomorrow, on Capitol Hill. Here in the D.C. bureau, we’ve stacked it on top of the House’s budget, and the Senate budget, and we’ve got a new doorstop. 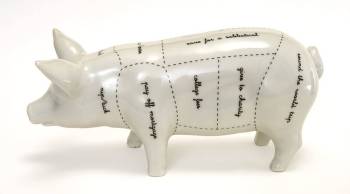 What are your budget priorities?