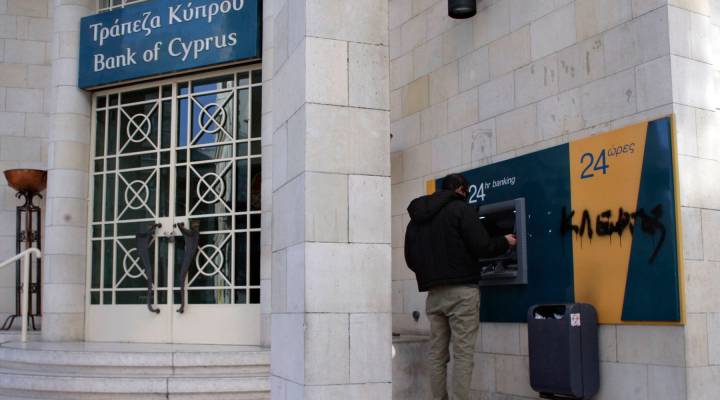 What just happened in Cyprus? An explainer

A man uses an ATM machine of the Bank Of Cyprus on March 24, 2013 in Limassol, Cyprus. Milos Bicanski/Getty Images
Marketplace Whiteboard®

What just happened in Cyprus? An explainer

A man uses an ATM machine of the Bank Of Cyprus on March 24, 2013 in Limassol, Cyprus. Milos Bicanski/Getty Images

The Cyprus affair is a brutal reminder of the fact that when you “save” your money by putting it in a bank, you’re not really “saving” it at all: You’re lending it.

The bank borrows from you at a certain rate of interest, and then turns around and lends the same money out at a greater rate of interest. Well, not all of it. It keeps a wee bit of money on hand so that when we want to do a bit of shopping, we can get cash out of the ATM.

The Cypriot banks did two things. First, they offered depositors really good rates of interest — as high as 4.75 percent for long-term accounts — which attracted not only gaggles of old Cypriot ladies, but also hordes of foreigners.

How could the banks afford to pay such great rates? By investing the money from those “savers” in something that itself paid really great rates of interest: Greek government bonds.

When Greece got bailed out, the value of the bonds was cut in half. But that wasn’t all: The fat interest rate that those bonds were paying was also cut — to just 3.5 percent.

That meant Cyprus’ banks had a lot less money coming in the door. But they still had to pay their depositors — and in some cases they’re paying depositors more than they’re getting from the bonds.

In other words, the Cypriot banks are deep in debt, and they’re not making enough money to make their interest payments. They’re on the verge of going bust.

For help, they turned first to their European neighbors, who agreed to lend them some cash. They’ve now got more money coming in the door, but it’s not enough. Now they need to attack the problem at the other end, by reducing the amount they owe.

Who do they owe money to? The depositors.

Now, some of those depositors are protected — accounts under 100,000 Euros are insured — so you can’t touch them. But the other accounts?

Cyprus is taking a big chunk of the money in those accounts — around 30 percent.

The banks are a bit like the patriarch of a large family who has taken a huge pay cut. His family consists of a bunch of children, aged anywhere between 5- and 25-years-old, and now he’s struggling to feed everyone. He gets a loan from his uncle, but it’s not enough. Something’s gotta give! He can’t stop feeding  the little kids. But the over 18s? Sorry boys and girls. From now on, 30 percent less soup for you.

The 30 percent “tax” on those big accounts does two things: First, it brings money into the door of the banks, giving them more money to operate with. Second, it reduces the amount of interest they have to pay to those account holders each month.

Feelings are running high, and two things could happen here. The adult offspring — the depositors who are getting whacked in this case — may decide to take their business elsewhere. And the little kids — the small depositors — may lose trust in the system and the banks. Sure their money is safe for now. But what about tomorrow? They may decide their money’s safer elsewhere. Maybe in their mattresses. Maybe offshore.

Either way, that’ll mean big problems, for Cyprus and its banks.