Realtors ask: "What can I do to get you OUT of that house?"

Realtors ask: "What can I do to get you OUT of that house?"

It’s official — as of March 20th, the spring real estate season is upon us.  And with record low interest rates, we’ve been hearing for months now that there’s never been a better time to buy a home.

Trouble is there’s not much to buy, with inventory at its lowest point in over a decade.  The hunt for listings has some realtors trying new tricks and even pulling out some old ones.

In Boston, one of the hottest addresses is the city’s Seaport District.  It’s full of trendy new restaurants and warehouses converted to office space and condos.  There are plenty of units to rent here, but places for sale are rare.  So when a loft opened up in a former bra factory, Realtor Ken Snyder jumped on the listing.

“It’s really huge, just shy of 1500 square feet,” Snyder says, showing off the unit.  “So you’ve got the concrete columns, concrete floors, double-height windows, and the exposed HVAC pipes. A lot of people kind of like that aesthetic.”

Snyder says the owners have been renting the loft but were not planning to sell until they saw a post on his Facebook page about the shortage of homes on the market and bidding wars over new listings.

“I’ve been posting kind of my war stories with buyers, saying ‘Hey, you know what, I’ve had six offers on this, seven offers on that, twenty-five offers on this one.  Sellers, hello?  Where are you?!’” Snyder says.  “There’s such little inventory that my joke is it’s like the last shrimp at the buffet at a cocktail party and everyone’s jumping on it to try and get to it.”

Other realtors in the area are holding classes for first-time home sellers, instead of buyers.  There are half as many homes on the market in Massachusetts this year as there were before the recession.  The National Association of Realtors (NAR) says across the country, inventory hasn’t been this low in 13 years.

“Many of the investors have come into the market, scooped up property at bargain prices hoping to rent it out,” says NAR Chief Economist Lawrence Yun.  “The second part is that home building activity has been greatly suppressed for the past 5 years.”

Yun says new home construction is at a 50-year low.  One silver lining for sellers — the inventory shortage is driving up home prices.  That’s good news for people whose homes lost value during the housing crisis and the spring market might move some of them to sell.

“There will be some temporary relief, but very temporary, because over the long haul, the true way to add inventory is through new home construction,” says Yun.

So until building picks up, the bottleneck continues.  In the suburbs of Boston, Realtor Gary Rogers estimates there are ten buyers for every seller, and to find new listings he’s using tactics that he hasn’t relied on for a decade.

“We’re writing letters to sellers,” he says.  “We’re actually going back to snail mail.  We used to have these huge mailing campaigns and I’d drop a thousand dollars a month on mail.  It used to be junk mail. Now nobody else is doing it, and all the sudden I’m getting calls.”

But there’s still one big problem…

Even when Rogers does find potential sellers, he says a lot of them are afraid to go live with their listings; with such low inventory on the market, they’d have no place to go if their homes sold. 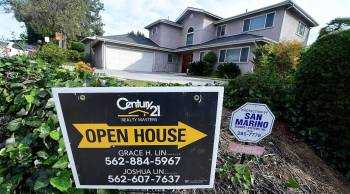