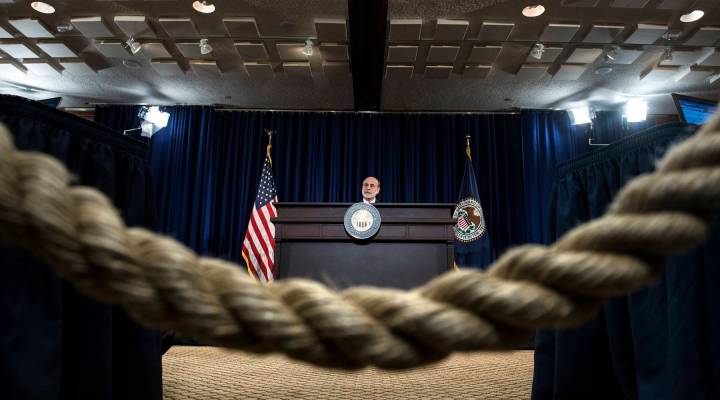 What did the Fed just do?

What did the Fed just do?

What did Federal Reserve Chairman Ben Bernanke do yesterday? He put speed limit signs up on the freeway.

Our economy is like a car driving on that freeway, and the Federal Reserve is at the wheel. Well, let’s make it just Ben Bernanke at the wheel, with the rest of the FOMC in the back seat, yelling driving advice at him. Ben doesn’t have control of the steering, exactly, but he does have his foot on the gas.

In the past, Ben and his ilk haven’t seen a need for any kind of speed limit when they’ve driven the economy. They keep a careful eye on the speedometer, of course, and they listen closely to the sound of the engine, but they decide how fast or slow the economy should go on their own. They don’t need no stinkin’ road signs.

Except that now they do. Ben Bernanke has got the accelerator pedal firmly pressed to the metal — that’s all the bond buying you hear about that pumping cash into the economy. But while we are moving, we’re not what you’d call speeding.

See, right now the car — our economy — is really heavily weighed down. The suspension is maxed out, and the muffler is scraping on the road, throwing off sparks. It’s making horrible noises, and making people worried.

Inquiring minds want to know what it’s going to take to get Ben to ease off the gas and stop straining the engine like this. In the past he might have told them to mind their business. But this is the new millennium, and Ben’s an empathetic guy who believes in transparency, so he’s putting up some signposts to clarify things for us.

He’s saying that he’ll keep the pedal to the metal until we hit either of two speed limits: 6.5 percent unemployment or 2.5 percent inflation. Only then will he stop buying bonds and allow interest rates to rise.

When will that be? The Fed projects that should happen in 2015. Let’s hope this old jalopy can last that long. I guess it’s a good thing it’s American made!