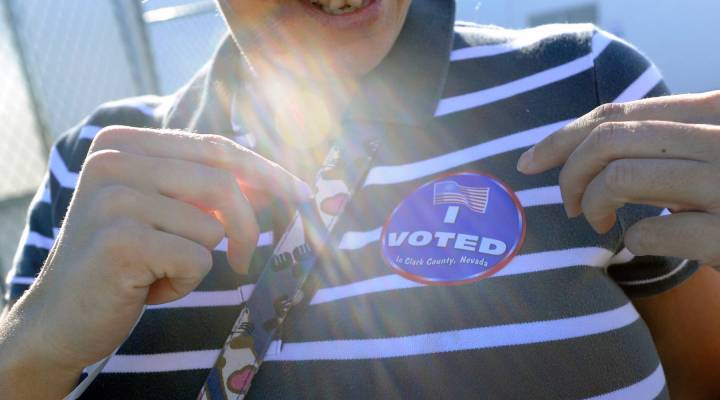 Yea or nay: Whether to talk politics at work

Yea or nay: Whether to talk politics at work

CORRECTION: The original article incorrectly spelled the name of workplace etiquette expert Syndi Seid.  The text has been corrected.

Talking politics at work: Yea or nay? Voters were divided at one polling site in the Los Feliz neighborhood of Los Angeles.

“I think it’s kind of taboo, most people kind of keep it to themselves,” says Lee Peglow, who works at Fox Studios.

Other workplaces operate a little differently. “We’ve made a few jokes as Election Day approaches, because we’re split,” says lawyer Kathleen Salvati. “It’s in good fun among our colleagues. It hasn’t gotten too passionate.”

Of course, there are workers in every office who especially politically inclined and want to share their political views. Engineer Daniel Narre says talking about political issues at work is important to him and his colleagues tend to be “open, listening. Sometimes there’s a visual note that they don’t want to particularly engage in that conversation and I respect that.”

Talking politics in the workplace is tricky, especially this election, says management consultant Susan Heathfield. “I’ve never seen anything like this year,” she says. “I’ve heard everything from coworkers yelling at each other to people not speaking to each other to rifts in relationships.”

Heathfield says emotions are running especially high this election and it’s very important not to gloat tomorrow if your candidate wins. In general, she recommends avoiding political talk at the office altogether.

But that’s not how many of us feel, according to a new survey from job site CareerBuilder. It found 44 percent of workers felt comfortable expressing political views at the office, 42 percent didn’t. Rosemary Haefner, vice president of human resources at CareerBuilder, says she was surprised at how comfortable people seemed to feel talking politics at the office.

So is there a right way to talk politics at the office? Workplace etiquette expert Syndi Seid recommends something she calls “the sandwich technique.”

“Maybe start out with a phrase such as, ‘Well, I’m sure you have your own opinions…'” says Seid. “You can then say, ‘Well, I feel this way.’ And end it with a reaffirmation of, ‘I certainly understand that the other person may have a different opinion.'”

Seid advises people to be careful about what they say on social media, since coworkers can read those messages. Voter Steve Lichtman says he tries to remember that.

“Especially nowadays with Twitter and Facebook, it’s pretty easy to declare your allegiances,” he says. “I try to keep it under control, but it’s hard sometimes.”