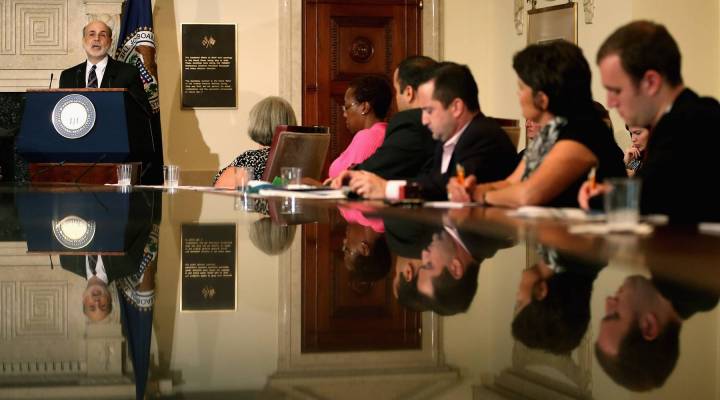 PODCAST: The coming of QE3

PODCAST: The coming of QE3

Federal Reserve Bank Board Chairman Ben Bernanke speaks to K-12 economics teachers about 'the need for personal financial education in the wake of the recent financial crisis' at the bank's headquarters August 7, 2012 in Washington, D.C. Chip Somodevilla/Getty Images
Listen Now

American stock markets aren’t likely to see much action until around 12:30 eastern time today. That’s when the Federal Reserve wraps up a two day policy-setting meeting. The big question is whether they’ll launch another round of “quantitative easing” — buying up bonds to inject some money and a bit more pep into the U.S. economy.

Jobless claims are out for last week — 382,000 people filed for first time unemployment benefits. That’s up 15,000 from the week before, and is higher than economists expected.

Inflation appears to be on the rise. Wholesale prices increased 1.7 percent in August the biggest jump in three years. That was mostly because of the rising cost of gasoline.

Things could get interesting in the global business battle between aerospace and defense contractors in the U.S. and Europe. Europe’s airline kingpin EADS — that’s the parent company of Airbus — is in merger talks with the continent’s biggest defense contractor, BAE Systems. That could have U.S. leaders Boeing and Lockheed Martin playing a little defense themselves.

Now you can reserve the right to Elmo. This year Toys R Us will let shoppers reserve in demand items from a 50 hottest holiday toys list. Early bird holiday shoppers will just need to sign up and make a 20 percent down payment before October 31st. Holiday shopping on October 31st? I guess procrastinators need not apply.

Directors at Ford Motor Company are meeting today. There’s word the agenda could include the first step toward a change in management at the company.

Apple’s iPhone 5 was unveiled last night it’s 20 percent lighter and 18 percent thinner and goes on sale next week. Fifty million iPhone 5s are expected to get snapped up by the end of the year. And each one is a potential cash cow for the wireless carrier the iPhone customer chooses. But cell phone companies will have to spend money to make money.