An app for hailing cabs

An app for hailing cabs

“You using an app to be talking to ME?” – Travis Bickle

New York just got a little less New Yorky as people hit a Hail button on an app instead of yelling, “TAXI!” and stepping into traffic in that certain way. An app called ZabKab (why do so many app names have to be so ridiculous?) is now live and being used by passengers and cabbies alike in New York City. It’s a GPS beacon that can be used by people needing a ride to essentially broadcast their location, then cab drivers can spot passengers nearby and drive over for the pickup. Passengers can also provide additional information in advance like where they’re going and how many passengers they have.
From USA Today:

Developing an application for NYC yellow taxi cabs is a little bit tricky because of Taxi & Limousine Commission regulations (TLC).
The TLC requires Medallion taxi drivers to only pick up hailing passengers. The drivers cannot be a part of a dispatch system or pre-arrange taxi services. So naturally, this presents a little bit of a challenge when trying to create an app that is supposed to make it easier to find a cab.
ZabKab, however, does not offer a pre-arranged service, but rather allows taxis to see where customers are.
The TLC also prohibits the Medallion taxi drivers from using a mobile device while they are driving a passenger, but the new application addresses this by only allowing the driver to view the app display when the car is at a standstill. When the cab starts to move the app display fades away. 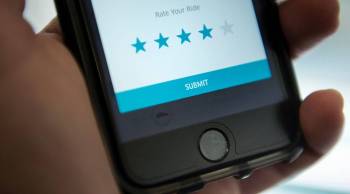