Jeff Horwich: You might naturally think poorer families have a harder time paying for college. In many ways, that is of course true.

But a new analysis of financial aid data by the Wall Street Journal found something surprising. In recent years, the American families that saw the biggest increase in their student debt burden were middle-upper-income families making $95,000 to $205,000 a year.

For more about the findings, I’ve got Ruth Simon. She cowrote the story for the Journal, along with Rob Barry. Ruth, thanks for your time.

Ruth Simon: Pleasure to be here.

Horwich: So middle-upper-income families have seen a big jump in the percentage toting around student loan debt for their kids, for the most part. What’s behind that trend?

Simon: There are a couple things behind that trend. One thing is college costs keep getting higher and higher, but the ability of families to pay that price tag out of their pocket, it’s getting harder and harder. People are just nervous, there’s still this same anxiety about ‘If I have this money, can I really use it all?’

Horwich: Seems like these kinds of families would of course be going to more expensive schools than other types of families. They also, I presume, can’t get as much aid in terms of grants, right?

Simon: There are a couple things that I say about that. One is: There are a number of families that are choosing these more expensive schools, but even the public universities that I’ve talked to have reported that they’re seeing more borrowing among upper-middle-income families. What we find is that lower-income families are likely to have a bigger portion of their tuition costs covered by grants and other kinds of aid of that like. And they’re also, on average, sending their kids to less expensive schools.

Horwich: Given the patterns that you’re seeing here, what could be the possible effect on colleges themselves?

Horwich: Ruth Simon with Wall Street Journal. Thanks for your time. 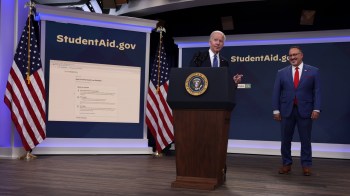