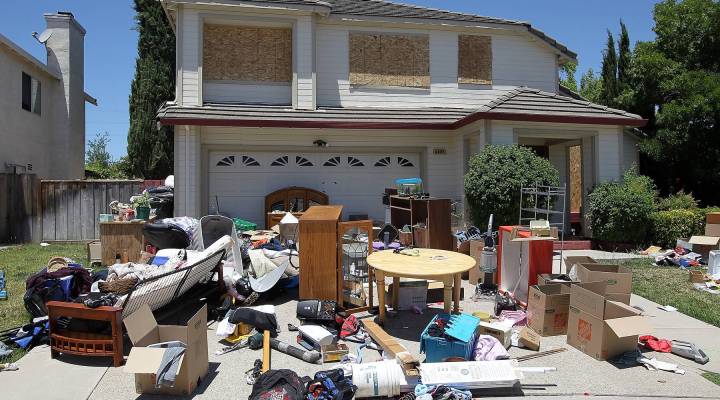 PODCAST: A light at the end of the housing tunnel

COPY
Furniture and personal belongings sit in front of a house that appears to be abandoned on June 14, 2012 in Antioch, Calif. Justin Sullivan/Getty Images
Mid-day Update

PODCAST: A light at the end of the housing tunnel

Furniture and personal belongings sit in front of a house that appears to be abandoned on June 14, 2012 in Antioch, Calif. Justin Sullivan/Getty Images
Listen Now

Mortgage giant Freddie Mac brought in $3 billion in profits last quarter. That’s the largest profit for Freddie since the government took over the lender four years ago.

A number of reports out of Europe today were gloomy on numerous fronts. The Bank of England forecasts this morning the U.K. economy will not grow at all in the coming quarter. Across the channel, the French central bank says the euro’s second-largest economy is headed for its own recession. And Germany’s being infected by all this through its exports, which fell in June.

Also have some new numbers from the Labor Department. American worker productivity grew faster in the second quarter than economists had expected. Specifically, Americans were 1.6 percent more productive than they were at the same time last year. And job openings jumped to a four year high in June: 3.7 million.

As American Airlines winds its way through bankruptcy, some of its union workers are voting on new contract offers. We’re waiting this morning for the results of the voting by two big labor unions-representing pilots and maintenance crews. Next week, a judge will decide if the company can throw out its old labor contracts and impose even more severe cuts on the workers.

We’ve talked about the effect dry weather in this country is having on corn and soybean prices. But it turns out that bad weather
elsewhere in the world is affecting global tea prices. The cost of good quality, black tea has shot up 41 percent on the wholesale market this year.

If you needed any more evidence that there are way to many TV channels right now: BSkyB, the British satellite broadcaster, is adding a new channel in October that will do nothing but play the 22 James Bond movies. On repeat. For a month.