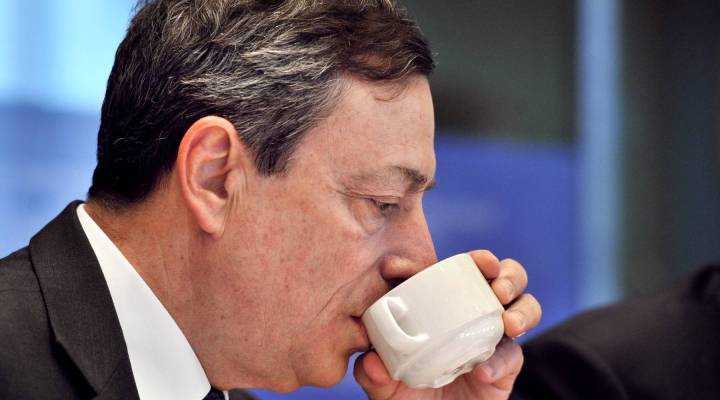 PODCAST: The ECB makes a statement, Americans like coffee

COPY
European Central Bank President Mario Draghi drinks coffee during a meeting where he is to brief the European Parliament's economic affairs committee on the eurozone debt crisis on April 25, 2012 at the EU Headquarters in Brussels. GEORGES GOBET/AFP/Getty Images
Mid-day Update

PODCAST: The ECB makes a statement, Americans like coffee

European Central Bank President Mario Draghi drinks coffee during a meeting where he is to brief the European Parliament's economic affairs committee on the eurozone debt crisis on April 25, 2012 at the EU Headquarters in Brussels. GEORGES GOBET/AFP/Getty Images
Listen Now

The word “stimulus” keeps sneaking back into the economic conversation, both at home and abroad. Yesterday, of course, the Fed decided it would continue to hold off on any new action — for now. Today, the head of the European Central Bank, Mario Draghi, spoke at a press conference in Frankfurt.

On Capitol Hill today, a House Committee is looking into the effects of the Supreme Court’s ruling on health care. Specifically, just how the IRS will assess a tax on people who don’t carry health insurance.

In Japan, two big electronics companies are reporting disappointing earnings this morning. Sony is reporting a $316 million quarterly loss. And Sharp announced a $1.2 billion loss, which was much worse than expected.

Today, Freddie Mac will tell us what the average interest rate is right now on a 30-year fixed mortgage. Last week, that number fell below 3.5 percent for the first time in 60 years of record keeping. Such low rates are adding to the “we must have hit rock bottom by now” attitude many experts now have towards the housing market.

Well, despite worries about the economy, the 2012 campaigning continues full steam ahead. President Obama will be in the Orlando area today for a campaign event. Central Florida has become a big fundraising destination for both the president and Mitt Romney.

To Australia, where the finance minister has an unusual economic hero — not Milton Friedman or John Maynard Keynes, but rather Bruce Springsteen. Finance Minister Wayne Swan says Springsteen saw what many economists missed with his songs about the collapse of the New Jersey construction industry and the closure of small town stores. Swan says his economic bible is the 1975 album “Born to Run.”

Tomorrow, we’ll get a reading on job creation for the month of July from the Labor Department, and whether it’s a good or bad report, it’s sure to have impact on the presidential race. Plus, the latest data on how many people in America are drinking coffee.