Once we all have smartphones, there will be no accidents

Once we all have smartphones, there will be no accidents

There are few easier buttons to push than the one marked: “Your phone is tracking your every move.” That’s a big button! And it usually gets people hopping mad with concerns about privacy, not to mention multiple plays of Rockwell’s “Somebody’s Watching Me” here on Marketplace Tech Report. To Mr. Rockwell and the rest of you, I say ease up. Maybe you do want to be watched just a little, especially if you’re a pedestrian. Oh, you are? Well then you’ll be interested to hear about new car technology being tested by General Motors that can help stop cars from running into pedestrians carrying smartphones.

Although both cars and smartphones are filled with sensors, the solution GM is testing doesn’t need any of them. Instead, GM is banking on wireless connectivity; specifically the Wi-Fi Direct standard. Conceptually, cars would be actively looking for Wi-Fi Direct smartphones — and the owners of those devices — and could signal an imminent collision in advance by comparing the two signals up to 656 feet apart.

GM says connecting phones to phones is much faster than going through a third-party network, like transmitting a signal from car to cell tower to satellite and back. GM says pedestrians could help arm themselves too:

The automaker also is looking to develop a complementary app for Wi-Fi Direct-capable smartphones that can be downloaded by frequent road users such as “bike messenger” or “construction worker” that will help Wi-Fi Direct-equipped vehicles identify them. 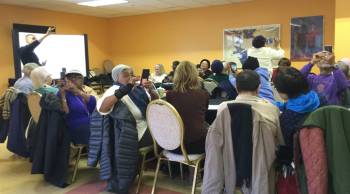 The older generation wants to know more about smartphones