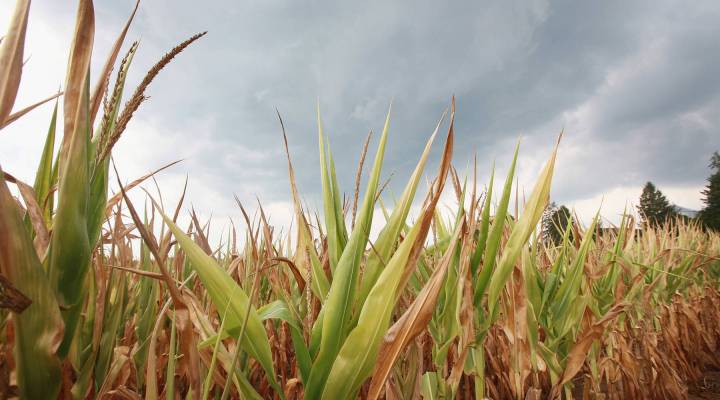 The drought to affect prices at the supermarket

COPY
Storm clouds roll over a drought-stricken cornfield on July 19, 2012 near Spencer, Ind. The corn and soybean belt in the middle of the nation is experiencing one of the worst droughts in more than five decades. Expect the prices for meat and dairy goods to rise as the Midwest drought continues. Scott Olson/Getty Images
Money Matters

The drought to affect prices at the supermarket

Storm clouds roll over a drought-stricken cornfield on July 19, 2012 near Spencer, Ind. The corn and soybean belt in the middle of the nation is experiencing one of the worst droughts in more than five decades. Expect the prices for meat and dairy goods to rise as the Midwest drought continues. Scott Olson/Getty Images
Listen Now

Stacey Vanek Smith: Reports issued by the U.S. Department of Agriculture don’t usually create ripples beyond a small pool of farmers and investors. Today, though, the USDA releases a much-anticipated briefing: the monthly food price forecast. Everyone — from store owners to consumers — is waiting to see how food costs are likely to be disrupted by the drought that is crippling many corn and soybean farmers.

It’s a perfect subject for Money Matters, our regular segment exploring how the news of the day is impacting our pocketbooks. With me to talk about this is Paddy Hirsch. He’s the senior producer of our personal finance show, Marketplace Money. Welcome, Paddy.

Vanek Smith: So Paddy, we’ve heard a lot about the effect this drought will have on the global food chain, especially since we’re such big exporters of corn and soy. But how about food prices in our supermarkets? Are we going to see those affected?

Vanek Smith: That’s because corn is being used as feed?

Hirsch: Exactly. And we can start to see those prices rise within the next couple of months or so. You’ll probably see it in eggs and other dairy first.

Hirsch: Well because of the short time between when those animals consume the corn, the feed, and when those products hit the markets. Obviously, the chickens are eating the feed — bam, they pop out an egg. It’s a lot more quick for that to take place than it is to, say, box up a box of corn flakes and put them up on the shelves.

Vanek Smith: Right. And then I guess the actual chicken comes later, the meat?

Hirsch: Yeah, the meat is next. Although weirdly enough, you might see meat prices fall a bit initially, because some farmers are going to want to slaughter their livestock rather than having to pay the high cost of feed.

Vanek Smith: Paddy, what about the other foods that are made from corn, like cereal and things like that?

Hirsch: Like your corn flakes? That’s a lot of stuff, actually, because of stuff that’s made of corn syrup and that kind of thing. Some consumer groups estimate that as much as 75 percent of the foods that we buy in the supermarket contain corn.

Hirsch: So you’d think that with corn getting really expensive now, your corn flakes are going to get a lot more expensive too. The thing is that most of the costs comes from packaging like marketing, distribution, all that stuff. So the price of corn is going to have to get really, really high before it really bumps up the price of a box of corn flakes.

Vanek Smith: So we might just see a small bump in those kinds of foods?

Hirsch: Hopefully, although if the drought spreads, it could get worse. Right now, the drought’s affecting only about a third of corn and soybean production. If it does spread, and crops in states like North Dakota and Minnesota are affected, we could start to see prices go a lot higher in the future.