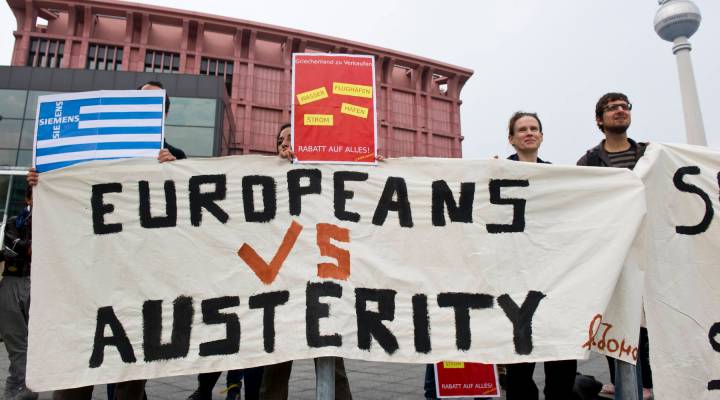 COPY
Words like "austerity," "sequestration" and "equity" are commonly used in news stories everywhere these days, but do you know what they mean? JOHN MACDOUGALL/AFP/Getty Images

Words like "austerity," "sequestration" and "equity" are commonly used in news stories everywhere these days, but do you know what they mean? JOHN MACDOUGALL/AFP/Getty Images
Listen Now

Jeremy Hobson: The ECB could cut rates later today in an attempt to stimulate tightening credit markets across the euro zone that have been contracting due in part to stiff austerity measures. Wow, business news can be jargony, which is where our next guest comes in.

Paddy Hirsch is Marketplace’s resident explainer. You may know him from the Whiteboard financial explanation videos at marketplace.org. Paddy, good morning.

Paddy Hirsch: Good morning to you.

Hobson: Well Paddy, let’s start with a word that every time I hear it, I wonder: Do people really know what this word means? Because we didn’t hear it until recently, and that is “austerity.”

Hirsch: Yeah, up until the recent unpleasant events, pretty much the only time you’d hear the word “austerity” or “austere” would be in some literary reference to a person’s simple clothing or living arrangements.

Hirsch: Exactly. So when we’re trying to understand words like this, I always like to return to the original Greek.

Hirsch: Indeed. In this case, “austeros,” which means bitter or harsh. And it’s a word that people in the wine business from time to time use to describe wines that make your tongue very dry.

Hobson: Probably ones that you would find in places that are having to have a little austerity right now.

Hirsch: Like Greece, Spain, Italy, Portugal — although maybe not too much in Ireland.

Hobson: Well what about another word that we’re going to be hearing more of soon, and that is “sequestration”?

Hirsch: Right, we’re hearing this word “sequestration” a lot in reports about the budget, and it’s one of these really legal words that’s kind of found its way into common language.

Hobson: Yeah, you usually hear about sequestration like you’re sequestering a jury.

Hirsch: Right, which means the jury’s isolated during a trial. And the original meaning of the Latin word “sequester” is trustee or mediator, but the way we’re hearing the word used today is much more aggressive. In this congressional context, the sequestration of the budget means quite simply that a certain amount of the budget — the budget money — has been held back by the Treasury before it’s even paid. It’s been confiscated, if you like.

Hobson: Well while you’re talking about the Treasury, let’s focus on another thing that has to do with Washington and politics, and that is Mitt Romney’s time in the private equity business. And I want you to just focus on the word “equity.”

Hobson: Right, to get some cash out of their homes?

Hirsch: Right, but equity really only means one thing: It means a share, whether it’s a share in a public company, a share in a private company, or a share in your house — which of course you share with the person who’s lent you the money, which is the bank. That word equity means just one thing: a share.

Hobson: Marketplace’s resident explainer Paddy Hirsch, who does the Whiteboard explainer videos. Paddy, thanks so much, and we look forward to talking with you about some more words soon.

Hirsch: I look forward to it too, Jeremy. Thank you.