What it takes to climb Mount Everest

What it takes to climb Mount Everest

Kai Ryssdal: This is turning into a crowded, and tragic, season on Mount Everest. Four people died this past weekend in what’s been described as a traffic jam trying to get up to the top. The government in Nepal says a similar rush to the summit will begin again soon.

Climbing the world’s tallest mountain hasn’t been the sole preserve of professional climbers for a while now. All kinds of people do it. And the more popular it gets, bigger the business it is.

Nick Heil is a contributing editor at Outside Magazine. Nick, welcome to the program.

Nick Heil: Nice to be here.

Ryssdal: It does seem to me, this whole thing, is an exercise in risk management, right? That you’ve got to figure out what you can handle, what you can take — and then you decide to go or not to go anyway?

Heil: Yeah, I think that’s true of climbing generally, and it certainly is true of Everest. You’re on the mountain for a long time, usually about two or three months, and you’ve got a lot of people and it’s just a complicated process of getting up high and of course you’ve got a lot of dangerous terrain and you’re going to go to extreme altitudes. So the risks are considerable. And it’s kind of this loose confederacy of independent climbing teams that are trying to communicate, they’re trying to cooperate, they’re all trying to work together. I mean, everybody wants to stay safe, but everybody’s wants to summit too. So you’ve got to kind of manage this sort of frontier community over there and how successfully that’s done I think is a huge question mark. It varies from season to season.

Ryssdal: And that’s why you have these companies whose business it is, whose job it is, whose livelihood it is to get people up to the top safely, right?

Heil: The commercial guides that are up there, they are taking on quite a chore, which is to get less-experienced — in some cases, inexperienced — clients up and down safely. And that’s a big job.

Heil: It’s not. I couldn’t put any hard numbers on it for you, but I know there’s quite a number of commercial operators that are up there. I think the last numbers I saw were about 750 total people, so that gives you an idea of the total crowd and you can divide that into expeditions of anywhere from 10 to 60 people. You’ve got quite a few different outfits that are working up there.

Ryssdal: If I decide today that if I want to do Everest next May, how much is it going to cost me?

Heil: If you want to go with a full-service outfitter that’s got a good reputation, you can plan on spending about $60,000. That may not include airfare to Nepal.

Ryssdal: Tell me what happens up high on the mountain when this many people get there. What’s the traffic jam? What happens?

Heil: Well you know, the problem is that that the route follows a single line. I mean, everybody’s kind of funneled into this single footpath route up on these high ridges. And you can’t really go around or pass other climbers; there aren’t really variations to the route. You’re really stuck going as fast as the person in front of you. So you can imagine: You’re a fit climber who’s trained all year, and you get stuck behind somebody who is in not as good of shape or maybe they’re not feeling well or they’re going more slowly. There’s not a lot you can do about it, because you don’t want to unclip from the rope and expose yourself to the dangers. So in a way, that’s kind of the process — you get up there, you get stuck in the line, there’s not a lot you can do. It’s like being in a traffic jam on I-5 trying to go to work. You can’t go anywhere.

Heil: No. I don’t think many people, whether or not they make it to the top of Everest, describe the process as fun.

Ryssdal: Nick Heil, he’s a contributing editor at Outside Magazine. His book about Mount Everest is called “Dark Summit.” Nick, thanks a lot. 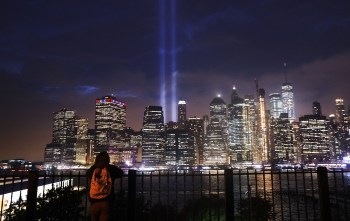