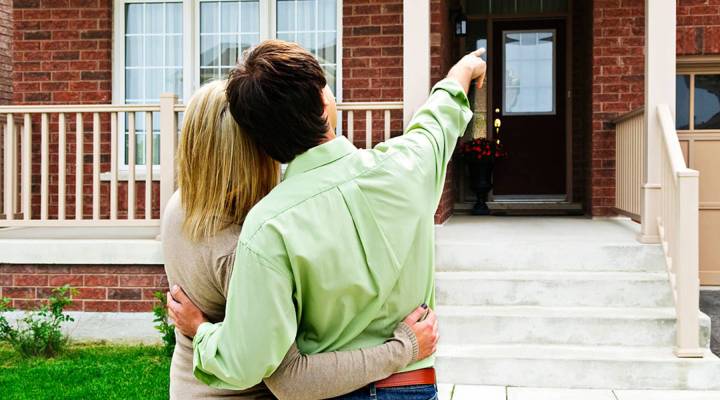 Tess Vigeland: We’re about five years into the housing bust, and it’s safe to say home ownership has lost a bit of its luster. I’m not sure we know at this point where it fits in the American Dream anymore. But it still holds a place in the American novel. And it’s one of the main characters in “Norumbega Park,” new book from author Anthony Giardina. The story takes place in 1969 New England. The plot involves Richie Palumbo and his pursuit of this one house he spots while on an outing. It quickly becomes “THE HOUSE,” and the novel follows his obsession with owning it — no matter the cost.

Anthony Giardina: This is a man who has a perception. That is family’s fate is hinging on a decision he’s going to make. He’s not sure at the beginning of the novel what that decision is, but he feels like there’s a danger, that they’re going to be stuck in a kind of Italian-American working class existence. And purely by accident, he’s driving with his family into this town and sees this house. And this is something that’s been coming really from his childhood, his young adulthood — a sense that what you’re supposed to do as a man, as a father, is you’re supposed to ascend, and you’re supposed to make it possible for your family to ascend. And in the novel through a curious turn of events, he begins to see this town and this house as the means of ascension. Not only for himself and his wife and them as a family, as a class, but he actually believes that this going to change the possible future, the possible fate of his kids.

Vigeland: When Richie sees the upstairs for the first time, his mind kinda wanders to a time, you know, when his family is going to live there, and this is before they moved in. I wonder if you could read that portion for us to get a sense of what he was instilling in this house before he was there.

Giardina: There were three bedrooms on the second floor, two on the third, where the roof sloped. He went into one of the bedrooms, where their son must have slept. A diploma from Bowdoin hung on the wall. There was a washstand and a mirror, and when Richie flicked on the light, he saw a picture of a boy and a girl dressed for a prom, the boy in a white tux, his hair in a close-cropped postwar 1940s cut, the girl leaning down, her eyes slanted toward him, a big, secret, smile on her face, as if she were already starting to undress for him. The photograph captured abandon, blondness, and wild good health. jack will sleep here, Richie thought. Jack will wake to this: the Bowdoin diploma, the fields that stretch endlessly behind the house.

Vigeland: Not much expectation going on here.

Vigeland: I guess what we really attracted me to this was this notion of where we place the house in our dreams of success and what a house brings to us. Because I think that that notion, you know was there for decades, but has really been called in question since the housing bust.

Giardina: Right. And I think that at that time, it was so much more accessible. And my parents, for instance in the mid-1960s, who were like Richie were very working class Italian-American people, surprised us all in the mid-1960s by taking us one day to a place in the woods that they had bought a lot, and they were going to build this beautiful house. Suddenly, my parents were displaying to me a sense of what their social ambitions were, and when it came time for me to buy a house in the late 1980s, I always assumed, OK, I’m gonna buy one house and this is gonna be it for me. This is gonna be the house that’s going to define me. It has now become a much more complicated issue. For instance, for my children, are they going to be able to afford a house at all? So it almost becomes like — I don’t want to call it a quaint notion — but it’s being called into question, are our houses going to define us anymore the way they did, for instance, for the family in this novel?

Vigeland: As the family’s story progresses and changes, the house is the one thing that remains a constant. And in the end, it brings something very different than what Richie initially believes it will, so what do you think the house represents?

Giardina: Richie had hoped that it was going change his family in a certain way, but both of his children make radical choices to kind of downgrade from what their expectations were. But in the end, his daughter brings to the house a Latino husband and his two children, and what Richie has in effect done is he has actually made it possible for someone else to have the ascension that his children couldn’t quite achieve. And that is for me, I guess, the most important thing about the novel, to show how this house affects this family, but affects some people beyond the family.

Vigeland: Where do you think the house fits now in our lives?

Giardina: I think it is still a dream, and talking to my daughter and her husband, when they come to my house, I can see that they are looking around, I can see that they are trying to imagine themselves. And it’s kind of wonderful to watch that this really difficult concept now in America still holds something for them. They still want that kind of space, that kind of ownership. And I hope they get it.

Vigeland: Anthony Giardina is an author and essayist. His latest novel is “Norumbega Park.” Thank you so much for joining us.

Giardina: Well thank you so much.