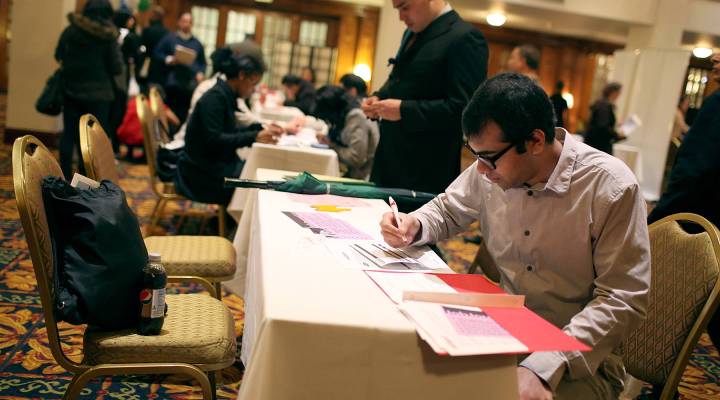 The Labor Department reports the economy added 120,000 jobs last month, and the unemployment rate dropped to 8.2 percent. It was a disappointment compared to expectations. Here, a job seeker fills out a job application in San Francisco, Calif. Justin Sullivan/Getty Images

The Labor Department reports the economy added 120,000 jobs last month, and the unemployment rate dropped to 8.2 percent. It was a disappointment compared to expectations. Here, a job seeker fills out a job application in San Francisco, Calif. Justin Sullivan/Getty Images

Stacey Vanek Smith: 120,000 people were hired in the U.S. last month. That’s according to numbers out just a few minutes ago from the Labor Department. That was roughly half of what economists had expected, and a significant slowdown compared to the last few months.

Jobs are often seen as the most important gauge of the economic recovery. Gus Faucher is a senior economist with the PNC Financial Services Group. He joins me live now to give us some context. Good morning, Gus.

Vanek Smith: Are these numbers as bleak as they seem?

Faucher: Well certainly, 120,000 jobs is a disappointment; we were expecting something closer to 200,000. However, if you take the average over the past three months, job growth is averaging more than 200,000 a month, and I think that this is just likely to be a one-month slowdown. I don’t think it’s going to persist.

Vanek Smith: Also, if you wouldn’t mind breaking this down for us a little bit: Which industries were adding jobs, which were the weakest?

Faucher: Manufacturing employment was up by 37,000 for the month, which is certainly good news. We saw continued job gains in health care, financial services, food services, professional and business services. Then we did see a big drop of about 34,000 in retail trade in March — it could be that some of the good weather earlier in the spring pushed up hiring in retail in February and then it fell again in March. And then we saw small job losses in construction as well.

Vanek Smith: Now, the unemployment rate did fall another tenth of a percent, we’re at 8.2 percent unemployment now. Is there some silver lining there?