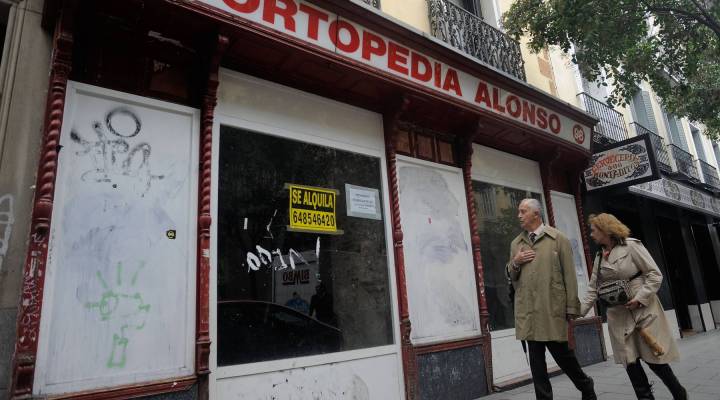 PODCAST: Americans paying off debt, not so much in Spain

PODCAST: Americans paying off debt, not so much in Spain

A couple walk past a closed down orthopedic shop on November 10, 2011 in Madrid, The current eurozone debt crisis has left Spain with crippling economic problems. Denis Doyle/Getty Images
Listen Now

There are fresh concerns about Spanish debt, after a disappointing bond auction yesterday. One analyst told the Wall Street Journal the medicine for the Euro Debt Crisis is wearing off.

The number of Americans applying for unemployment benefits fell last week. It’s now at 357,000. That’s a four year low – and it’s more good news ahead of tomorrow’s March Jobs Report from the Labor Department. If it shows more than 200,000 jobs added last month, we’d be in the best four months of job growth since 1999. This morning, the job placement firm Challenger Gray and Christmas reported that the number of planned layoffs dropped last month to a 10 month-low.

The average U.S. rate on the 30-year fixed mortgage was mostly unchanged this week, as the cost of home-buying and refinancing stayed near record lows.

U.S. consumers are paying down their debts more easily. One-time payments of consumer loans in the last three months of last year were looking the best they have since 2004. The American Bankers Association says their data showed a big improvement in the payment of car loans, credit cards and other debts. Delinquencies fell to less than 2.5 percent. The report excludes mortgage debt.

The Bank of England has kept its key rate at an all-time low of 0.5 percent and refrained from pumping more money into the British economy.

If you’re planning on having ham this Easter weekend – be prepared to do some spending. The cost of ham is up about 30 percent over last year at the wholesale level… In part because of an increase in the price of pig feed.

Which banker makes the most money on Wall Street? Turns out Jamie Dimon, the CEO of JP Morgan Chase. He was paid $23 million last year. More than any other banking chief. Dimon got a cash bonus of $4.5 million and $17 million worth of stock.

The British government has a little favor to ask of British tourists travelling abroad: “stop calling us asking for restaurant recommendations. Or directions. Or to complain that there are ants in your vacation rental house.” Those calls all actually came in to embassies. And so did this one: A British visitor to Rome called to ask if the consulate staff would go throw a coin in a famous fountain for him – because he forgot to do so while he was on vacation.

The next time you ask your boss for more vacation, you should tell her your life depends on it. And it’s true! According to data compiled by confused.com, people who take holidays are happier, more productive at work, feel better about their jobs and 20 percent less likely to die at an early age… That’s because vacation relieves stress…and lowers blood pressure