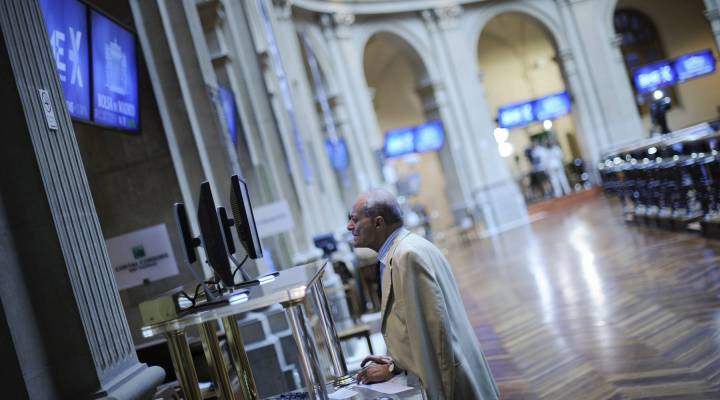 A man looks at screens at Madrid's Stock Exchange. Spain had trouble selling some of its government debt today. That's revived worries about the situation in Europe. PEDRO ARMESTRE/AFP/Getty Images

A man looks at screens at Madrid's Stock Exchange. Spain had trouble selling some of its government debt today. That's revived worries about the situation in Europe. PEDRO ARMESTRE/AFP/Getty Images

John Challenger is with job placement firm, Challenger Gray and Christmas; he expects the trend to continue.

John Challenger: We’re in a period where companies have set the stage for the kind of hiring that’ll really continue to drive unemployment down. Unless we see some shock to the economy, maybe these high oil prices, we should see strong hiring in the months to come.

Not such good news in Europe today. Spain had trouble selling some of its government debt today. That’s revived worries about the situation in Europe.

Vanek Smith: So it looks like the European debt crisis is off the back burner and back into the fire. How shielded is the U.S. from what’s going on now in Europe?

Faucher: Well the U.S. does have some exposure, primarily through the stock market. A lot of major U.S. corporations have operations in Europe, and if it looks like Europe’s problems are getting worse and that could cause stock prices in the U.S. to decline, one of the big reasons the economy has picked up this year is that the stock market has done very well. So I’m a bit concerned that if stock prices decline and households — particularly high-income households — would cut back on their spending.

Vanek Smith: It does seem like the major problem countries in the eurozone — Greece, Spain, Portugal — have had a lot of time to deal with their debt, just as banks in the U.S. have had time to minimize their exposure. Are we better off now than we would have been a few months ago?

Faucher: Yes, there’s no question about that. The ability to paper things over for a few months has allowed financial institutions to reduce their exposure to problems in Europe. So that’s good news for the U.S. economy. But there is still significant exposure there for U.S. corporations that sell into Europe, and then there’s also concern about lending by European financial institutions to the U.S. That could be a problem for U.S. businesses that depend on credit from Europe.

Vanek Smith: We got some good jobs news this morning. It looks like we’ll get more good news on the jobs front tomorrow. Could this potentially derail that?

Faucher: Not at this point, I don’t think so. I think that the job market in the U.S. has picked up, we’re adding about 200,000 jobs a month. I think that the U.S. economy have some momentum behind it. We’re getting to the point where you have job growth, that in turn is driving spending growth and that in turn drives further job growth. And I’m hopeful that the problems in Europe won’t detail that.

Vanek Smith: And finally, what will you be looking for as the situation unfolds in Europe?

Faucher: The key question is how much do the problems spread to other nations? Obviously, the problems are worse in Greece, but there are questions about Portugal, about Spain, about Italy, about Ireland, and the problems spreading there, and if they go to those countries, do they get to what we consider the most stable European countries — Germany and France?