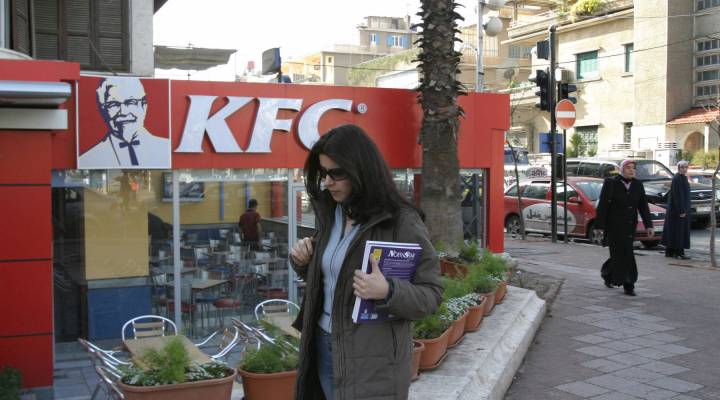 Syrian women walk past a Kentucky Fried Chicken restaurant in Damascus in 2006. The economic and social unrest in Syria lately is making it difficult for foreign businesses, like KFC, Cinnabon and United Colors of Benetton, to expand there. LOUAI BESHARA/AFP/Getty Images

Syrian women walk past a Kentucky Fried Chicken restaurant in Damascus in 2006. The economic and social unrest in Syria lately is making it difficult for foreign businesses, like KFC, Cinnabon and United Colors of Benetton, to expand there. LOUAI BESHARA/AFP/Getty Images

Stacey Vanek Smith: Syria says it’s started to withdraw troops from some cities as part of an international cease-fire plan. Though reports this morning indicate Syrian troops are not pulling back.

Meanwhile, the country’s economy is moving back in time. In 2005, import bans were lifted and foreign chains, like The Gap and KFC started pouring in. Now, they’re pulling out.

Katie Paul is a journalist based in Beriut. She’s written about this issue for Foreign Policy Magazine. Good morning, Katie.

Vanek Smith: Katie, you wrote an article that appeared in Foreign Policy about how businesses are faring in Syria, particularly foreign chains like KFC and the United Colors of Benetton. What did you find?

Paul: Well, I found that all of these stores had moved in in the last few years as the government was pursuing a liberalization policy. In the last decade since Bashar al-Assad took power, they’ve been liberalizing the trade laws, and so letting imports in. So you saw places like KFC and Cinnabon, you saw all of these things come in. But as the situation has evolved in Syria during the uprising, they’ve been running into more and more problems — just getting their products to Syria, transporting them around Syria and finding people who are willing to spend money on clothes and kind of frivolous things at a time when they’re struggling with increasing power cuts and many people are losing their jobs.

Vanek Smith: What are the long-term implications for expansion of foreign chains into Syria?

Paul: Like most things in Syria, I think it’s safe to be somewhat pessimistic at this point. A lot of the chains have cut down on their expansion plans, if not pulled out altogether. So for example, Benetton, which is one of the most established companies in Syria because it’s been operating there for so long, they had been planning to open 25 stores within the next few years, and they have knocked that down to about two or three stores. KFC had also been planning to expand and they’ve actually closed stores, so they still have one restaurant up in Aleppo, and a few in Damascus — and that’s because they can source their chicken locally.

Vanek Smith: Well Katie, what are the implications of this for Syria? Is it such a bad thing if foreign chains close?

Paul: No, no not necessarily. The people who really benefitted from these chains coming in were the privileged elite that had connections to the regime. They were the ones who got the contracts locally for them. So you saw a large portion of the population becoming less wealthy and more marginalized, and then a very tiny sliver actually benefitting from the wealth that was coming in. But it is a sign of the times, and it’s being perceived as such. So in that sense, it is sad to see happen.

Vanek Smith: Katie Paul is a reporter based in Beirut. Katie, thank you.