Kai Ryssdal: Let’s take a second as we part ways on a Friday to catch up on the news that didn’t quite make the headlines. It comes to us courtesy of Brendan Francis Newnam, Rico Gagliano, and the rest of the Marketplace staff.

Rico Gagliano: Rod Abid, senior producer of the Marketplace Morning Report, what story are you going to be talking about this weekend?

Gagliano: Oh. Really? Where does one get that?

Abid: For $3,000 a company in Seattle will give you a casket painted to look like slices of bacon. It includes a bacon air freshener on the inside so you can live in eternity with the smell of bacon.

Gagliano: This may be the first time you can be buried in a replication of the thing that may have killed you.

Brendan Francis Newnam: Sally Herships, what story are you going to be talking about this weekend?

Sally Herships: So The Beatles have just won a copyright infringement case against the Beatle Wheelchair.

Newnam: What is the Beatle Wheelchair?

Herships: It’s just a wheelchair called the Beatle. It’s made by a company in Holland, but The Beatles thought it was a little too close to their trademark.

Newnam: What does a wheelchair have to do with rock n’ roll?

Herships: Well, as the judge pointed out, the audience that listens to The Beatles is now getting old enough so that it may need a wheelchair. Thus, potential confusion.

Newnam: So I guess my Led Zeppelin hearing aids don’t stand a chance?

Gagliano: John Haas, editor, what story are you going to be talking about this weekend?

John Haas: Siri is getting sued.

Haas: She’s the little voice in the new iPhone that supposedly answers all your questions and gives you recommendations.

Gagliano: So why is she being sued?

Haas: Well, it’s supposedly because the Apple commercials show her answering every minute detail, but in reality she doesn’t always give the best answers or even understand what the heck you’re answering.

Gagliano: Are they calling her to the witness stand?

Ryssdal: The radio show Rico and Brendan do is called The Dinner Party. 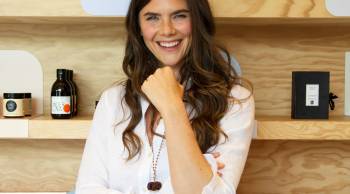 From Adaptogens to Power Dust, a look at Moon Juice