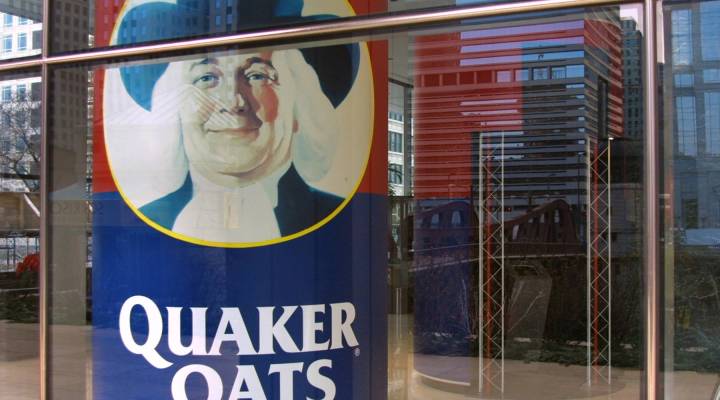 PODCAST: Foxconn workers get a raise, Quaker Oats gets a makeover

COPY
A large box of Quaker Oats is displayed in a first-floor lobby window at Quaker''s headquarters in Chicago. Soon, the brand will get a facelift. Tim Boyle/Newsmakers
Mid-day Update

PODCAST: Foxconn workers get a raise, Quaker Oats gets a makeover

A large box of Quaker Oats is displayed in a first-floor lobby window at Quaker''s headquarters in Chicago. Soon, the brand will get a facelift. Tim Boyle/Newsmakers
Listen Now

We’re getting back to our shopaholic ways in this country. Consumer spending was up half a percent last month — the biggest jump in 7 months. At the same time, the U.S. savings rate dropped to its lowest level in 3 years.

U.S. consumer sentiment rebounded to its highest level in more than a year in March as optimism about jobs and income overcame higher prices at the gasoline pump, said a survey released on Friday.

The pace of business activity in the U.S. Midwest slowed more than expected in March as employment and new orders dropped from elevated levels last month, a report showed on Friday.

The company that makes Apple products in China is pledging to improve working conditions at its factories. Foxconn says it’ll hike pay and limit work hours after an investigation found the firm was regularly violating labor rules.

There will be no shutdown of federal transportation projects this weekend. Congress passed a 90 day extension of funding; the President is expected to sign it.

The face on your box of Quaker Oats is getting a little nip tuck. The Wall Street Journal reports that Larry– as he’s known, of the black hat, white hair, ascot — is seen as a bit dated. So he’s slimming down, getting a haircut and about 5 years shaved off of his age. No word yet on whether he’s getting a sports car.